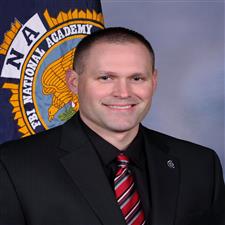 City Manager Sam Anselm is pleased to announce that Joplin’s Assistant Chief of Police Matthew Stewart will be promoted to the position of chief of police beginning March 2, 2016. Current Police Chief Jason Burns recently announced his retirement after 20 years of service to the community. March 1, 2016 will be his last day with the City.

Stewart started his police career with the City of Joplin in 2000 as a police officer. During his tenure, he has moved up through the ranks of the department, holding numerous command staff positions and leadership roles. Most recently as assistant chief, he has been responsible for the daily operations of the department as well as the budget for the Police Department. From 2011 to 2014, Stewart held the rank of captain and served as commander for the Special Enforcement Bureau and later served as the commander for the Support Services Bureau. Prior to these positions, he was a police sergeant from 2006 to 2011, and worked as a patrol sergeant. Also during this time, he served as the training sergeant for one year; the internal affairs sergeant for two years; and the investigations sergeant for two years. Throughout this time, Stewart was a SWAT team member, and later served as the SWAT team leader. From 2003 to 2006, as police corporal he served in patrol and was a member of the SWAT team worked as the FTO Supervisor.

“Throughout his career, Stewart has exemplified solid leadership and customer service skills necessary for a top law enforcement official,” said Anselm. “He brings a great deal of experience to the position and will continue to uphold the department’s mission in serving and protecting the public.”

Stewart is a graduate of the Federal Bureau of Investigations (FBI) National Academy Session #256 and has received numerous certifications in law enforcement services and criminal justice. He holds a Master of Science degree in Criminal Justice from Missouri Southern State University and Southeast Missouri State University. He received his Bachelor and Associates degrees from MSSU. He is a member of the Missouri Police Chiefs Association, International Association of Chiefs of Police, and FBI National Academy Associates. He has served as a Fundraiser Chairman with United Way and was on the Joplin Area Chamber of Commerce Leadership Joplin Steering Committee.
Posted by Randy at 8:12 PM

Kudos to the JPD, once again,for promoting from within. 2 consecutive Chiefs have now been promoted from within, instead of getting another out of touch, out of state mercenary like Lane Roberts.

Lane Roberts was hardly "out of touch". He successfully avoided Tom Loraine's demand for deposition Nd kept his job. Doing so, qualified his candidacy with the unethical school board as a fellow member, but he found an even better gig as the top cop in the state. Out of touch, Idont think so.