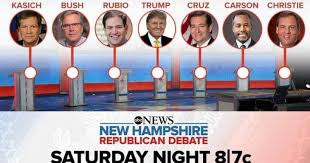 So much for momentum.

Marco Rubio came into tonight's Republican presidential debate on the heels of a much better than expected showing in the Iowa caucuses with a chance to push for a strong second place finish or perhaps even an upset in Tuesday's New Hampshire primary.

It should have come as no surprise to Rubio that the New Jersey governor would be on the attack since he labeled Rubio as the "boy in the bubble" earlier this week. Christie ripped into Rubio about sticking with his prepared lines and for some reason, Rubio not only continued to do so, but repeated the same prepared lines a couple of times.

For the rest of the debate, though Rubio improved as it went along, all of his careful preparation was turned against him as those watching him could easily imagine that he had scripted everything that he said.

Meanwhile, the candidate who continues to lead in the polls, Donald Trump had one of his better debates, but the shine appears to be off Trump as a candidate. His incessant whining about Ted Cruz cheating during the Iowa caucuses did him no good and his loss in Iowa took away what he has touted as his best quality- his record as a winner.

Ted Cruz was a non-factor in tonight's debate and he does not appear to be  headed toward a strong showing in New Hampshire. At the same time, he did nothing to damage himself in upcoming states where his brand of conservatism.

Tonight belonged to the governors. Not only did Chris Christie shine, but Jeb Bush had his second strong debate in a row and seems to be far more comfortable on stage and less flustered by Trump than he has been in past debates.

The revelation from tonight;s debate was the performance of Ohio Gov. John Kasich. For the first time, Kasich not only received considerable talking time, but he made the most of it. He clearly delineated the difference between himself and the other candidates, and at the same time, on Ronald Reagan's 105th birthday, Kasich displayed the pleasant demeanor that Reagan was known for.

John Kasich- Kasich sounded a note that did not come from any other candidate when he talked about the need to improve life for the developmentally disabled, the poor, minorities- in other words, those who are usually not mentioned in Republican debates- were reminiscent of the first President Bush's "thousand points of light" and President George W. Bush's "compassionate conservatism." Whether this plays anywhere else is a question, but it could do well in New Hampshire.

Jeb Bush- With two straight strong debate performances, this Bush is the candidate he needed to be from the beginning. With three candidates at the top of the polls who appear to be quite easy targets for attack (Trump, Cruz, and Rubio), even a fourth place finish in New Hampshire should be enough to keep Bush, who has plenty of money, in the race. Bush also scored points against Trump by attacking him on his position on eminent domain and Trump's attempts to use eminent domain to take away a 74-year-old women's property to benefit one of his casinos.

Chris Christie- Christie has never had a bad debate and he did not disappoint tonight. I do not expect Christie to do well Tuesday, but if he does, tonight will have helped him. If not, at least he provided a lesson to Marco Rubio, which should lead to the Florida senator's improvement in future debates.

Carly Fiorina- It seems inexplicable that Ben Carson keeps being in these debates, when we could have used a dose of Fiorina's combativeness tonight. Fiorina will be able to use her exclusion to continue to draw attention and perhaps do well enough Tuesday night to at least put her on the radar of the other candidates for a Cabinet post.

Education- As far as I can remember, no questions on education have been asked in any of the debates and the only mention of it is an occasional anti-Common Core statement in the Republican debates.

Donald Trump- Trump may win Tuesday night, and the odds are in his favor, but his star has certainly diminished over the past week. He did not perform well tonight, though the pundits are saying he did not hurt himself. Just take a look at his past week. He lost in Iowa, primarily because he foolishly dropped out of the Fox debate, he whined about Ted Cruz stealing the caucuses away from him, he canceled a rally in New Hampshire because of the weather, and tonight he continued to display the same boorish behavior that has been accepted until now, but only because Trump was supposed to be a winner. He may win New Hampshire and may win it big, but even if he does, he is not going to have an easy path to the nomination.

Ted Cruz- Where Jeb Bush has had two strong debates in a row, Cruz' record is the exact opposite. The only positive for him is that he was not as bad tonight as he was in the last debate. With Jeff Roe in charge of his campaign, don't be surprised if we don't start hearing about more shady tactics being used by the Cruz campaign. Why wouldn't Roe take what has worked for him in Missouri to the national level?

Ben Carson- I can see why some people support Trump and why some support Cruz or Rubio, or just about anyone else on stage, but I fail to understand how Ben Carson remains on the stage. He seems to be a nice man and a gifted doctor, but he is out of his element here and that becomes more obvious with each debate.

Marco Rubio- Tonight's terrible performance should be a turning point for Marco Rubio. Either he is going to learn from tonight or it will mark the beginning of the end. I am expecting the former.
Posted by Randy at 8:35 PM