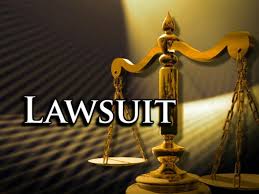 A lawsuit accusing a Joplin Police officer with punching a woman and fondling her breasts while arresting her at Mercy Hospital was dismissed today in U. S. District Court for the Western District of Missouri.

Andrew Protzman, the Kansas City attorney representing Cassie Tritthart, Miami, Oklahoma, filed the dismissal, which is without prejudice, meaning the suit can be reinstated at a later date. Each side will pay for its legal fees.

Earlier, Protzman had attempted to withdraw as Tritthart's attorney, but the judge did not allow him to do so until representation for Tritthart could be found.

The City of Joplin was listed as a co-defendant for "negligent supervision and training" of Lugenbell.

At Freeman Hospital, Plaintiff was given medication, and released. Plaintiff began to feel nauseous, and thought she may faint, and decided to seek a second medical opinion regarding her heart complaints.

Plaintiff asked Defendant Legenbell why he was in her private examination room, and told Defendant Lugenbell that she would not speak without first consulting an attorney. Next, without warning, Defendant Lugenbell grabbed Ms. Tritthart by her left arm and threw her into the hallway, causing her face to slam violently into the floor.

Defendant Lugenbell proceeded to punch and kick Plaintiff while she was on the ground, both before and after handcuffing her.

After handcuffing Plaintiff, Defendant Lungenbell fondled Plaintiff’s breasts, causing her bra to raise up around her neck, where it remained during the entirety of her booking and subsequent holding at the Joplin City Jail, until she was released.

Plaintiff was arrested and charged with (1) vandalism, (2) assault on a law enforcement officer, (3) resisting arrest, and (4) failure to comply with a request for information.
Those charges are no longer listed on Newton County online court records.

The lawsuit was initially filed June 29 in Newton County Circuit Court and was removed to federal court at the request of attorney Karl Blanchard representing the City of Joplin and Lugenbell.
Posted by Randy at 6:09 PM