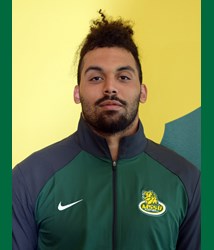 A lawsuit filed Wednesday in federal court alleges that University of Baylor officials ignored a woman's claim that she had been physically assaulted on three occasions by running back Devin Chafin.

The Title IX lawsuit is the fourth filed against Baylor University, with three filed by women who claim they were assaulted by football players.

The alleged assaults took place in March and April 2014. The victim was Chafin's girlfriend at that time, Dolores Lozano, who went public with her claims earlier this year when she revealed she was contemplating the Title IX lawsuit.

Lozano was kicked off the Baylor football team in June after being arrested on a marijuana charge in March. Shortly after his departure from Baylor, Chafin signed to play at Missouri Southern State University.

Lozano reported to police on April 11, 2014, that Chafin had grabbed her arm and slammed it against a car, in front of teammates and another witness. She provided photos of bruises on her arm to police. She told police that, weeks earlier, Chafin had grabbed her by the throat and slammed her against a wall, then threw her to the floor and kicked her, according to a police report. In that report, the officer wrote that the woman was uncertain about pressing charges, and no legal action was taken.

Chafin acknowledged that he grabbed Lozano, but denied the other allegations. After he told a Baylor assistant coach about Lozano's allegations, Chafin was punished with extra work in the weight room.

Update: Lawsuit claim: Baylor officials' negligence kept MSSU running back from getting the help he needed
Posted by Randy at 10:08 PM

Funny that the award-winning Globe sports department hasn't even touched this story.

I don't want to see your head swell any more than it already has, Turner, but there is no one working in the Globe sports department now who can hold a candle to the sports reporting you did at the Carthage Press. To bring you back down to earth, I will mention that you were always a lousy photographer.

Why would MSSU Football sign this guy after his troubles at Baylor? I guess football talent trumps morals and respect for women. And why didn't the award-winning Globe sports staff ever write a story about it?

I am a Baylor graduate and am embarrassed how Baylor University treated Devin Chafin. Chafin should be suing Baylor. Baylor's Title IX coordinator resigned very recently over administrators and regents snatching cases from her office. Dismissing students without due process.

This is a "Fatal Attraction" case and the young man was railroaded in an attempt to prevent additional negative press on top of actual cases where women were assaulted.

Baylor is writing a lot of checks to buy their way out thinking if things are quiet that people will forget they have not fixed any problems. They just fire, run-off, and pay-off. Get in line and jump on the gravy train.

This small-town station is doing a lot of good reporting. This should all be on their website. They obtained an audio of a staff meeting where the Title IX coordinator admitted that the COO came for a name and dismissed a student athlete with no investigation. They also caught an Athletic Department lifer misleading the press in a statement that the interim football coach dismissed said player. The coach refuted that. He suspended the player and upper administration yanked his scholarship and booted him from school. The entire coaching staff tweeted #truthdon'tlie in support of the head coach.

Light may come to Waco. That television station is pushing it on the Baylor Board of Regents. Don't rush to judgement on Mr. Chafin.

Did the woman who's covered in bruises also somehow force poor Chafin to buy drugs? He wasn't dismissed from Baylor for beating her on three separate occasions. He was dismissed following a drug arrest.