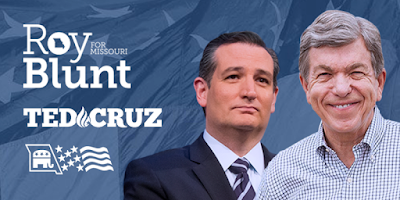 The lineup for the rally will be the same as for an earlier one scheduled in Springfield, which is described in the news release below from  the Roy Blunt campaign site:

Join Roy Blunt and Senator Ted Cruz for a GOTV Rally at 5:00 PM on November 2nd at National Safety Compliance Inc. in Springfield! Senator Cruz will rally voters and discuss the importance of this Election and path to victory on November 8th. Doors open at 4:30 PM and event begins 5:00 PM. You don't want to miss it!

Each guest is required to RSVP for Roy Blunt events, including all adults over age 10. Each attendee must complete registration separately. Actual event start times are subject to change. If you have any questions contact your local Friends of Roy Blunt campaign office or email event@royblunt.com.
Posted by Randy at 10:29 AM