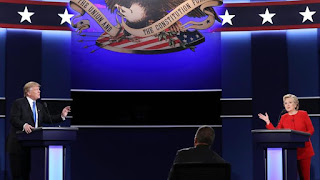 Tonight was the last debate and just like the first two it made me cringe that we have fallen so far from the types of debates we have known in the past. We have always had respectful debates in the past, even when the candidates could not stand each other.

A few years ago, I received quite a bit of criticism when I wrote negatively about the Congressman who shouted, "Liar," to President Obama as he was delivering his State of the Union message.

Now I look back on that shout and wonder if I was mistaken. Could that shout possibly pass for civility now?

Tonight, just as in the first two debates, candidates interrupted each other, the term "liar" was strewn about casually to the point where it nearly lost all meaning, and both candidates continued talking over moderator Chris Wallace on several occasions, far beyond the time-honored tradition of slipping in an extra sentence or two after time has expired.

On the other hand, we still probably learned more about the two candidates' positions on various issues tonight than in the first two debates combined.

Following are my winners and losers from tonight's debate. Please feel free to leave a comment or your own thoughts on the debate. I would love to hear from you.

Chris Wallace- Hands down, the winner of the debate. He asked questions designed to pin down both candidates, and kept control of the debate far better than Anderson Cooper, Martha Raddatz, and Lester Holt. The choice of a Fox News anchorman as moderator was criticized by some on the Democratic side, but Wallace has always been a top notch interviewer and a fair and tough one, just like his father. Fox News does emphasize different stories and angles than the other 24-hour news stations, but it has some top notch reporters. It also has Sean Hannity, but that's another matter entirely.

Hillary Clinton- She did not make any major mistakes and though that is a low barrier, that is all she had to do. She did not say anything that might convince Bernie Sanders supporters to stay home or take a flyer at Gary Johnson or Jill Stein.

Education- Three debates passed without one question being raised about education. Considering that neither Trump nor Clinton has anything worthwhile to say about K-12 education, it was probably just as well.

The American People- The debates are over.

Claire McCaskill- After I watched tonight's debate, I kept wondering if McCaskill, a Hillary Clinton supporter, might not have advised Clinton to make sure she faced a candidate like Todd Akin in the general election. Trump has done everything except talk about legitimate rape.

Donald Trump- I am sure there were many people who cheered when Trump referred to Clinton as "a nasty woman," but those are the people who were already going to vote for him no matter what he says or does. It's not a presidential comment but then, that should come as no surprise to anyone.

Trump, who has campaigned on the slogan "Make America Great Again," showed he has little or no understanding of what makes America great. His comment about leaving America in suspense about whether he will accept the results of the election if he loses, shows he does not understand that the peaceful transition of power after a change in president, which we will have this year no matter who wins, is part of what makes America great. This even applies in situations where we do not have presidential elections. It is not mentioned much any more, but in 1973 and 1974, during the height  of the Watergate crisis, there was a genuine fear that President Nixon would declare martial law to maintain power. Instead, he resigned August 9, 1974, an appointed vice president Gerald Ford became president with the support of both parties and government continued as it has always done.

We also made it through the 1960 and 2000 elections thanks to the gracious concessions of Nixon and Al Gore after the final results were announced (though it took five weeks in 2000) Considering that we also have an electoral college system that has resulted in candidates winning the presidency who did not win the popular vote and we still have peaceful transitions of power, it makes Trump's assertions even more reprehensible.

Hillary Clinton- She dodged some of Wallace's questions, but she did not do it in an artful manner. It was clumsily obvious she was dodging the questions The dodging on the Clinton Foundation question was painfully obvious. Wallace said beforehand he did not think it was his job to fact check the candidates. That choice worked with both Trump and Clinton. With Clinton, it showed that she was dodging. If she is not Crooked Hillary, as Trump termed her, she at least earned the title of Shifty Hillary. By launching into a dissertation about all of the wonderful things the Clinton Foundation has done and taking a brief shot at the Trump Foundation, she made it painfully obvious that her critics have her dead to rights on their claims that the Clinton State Department intervened to make sure the friends and contributors to the Clinton Foundation received special treatment.

Wallace leveled that charge. Clinton let it remain unanswered. The American people are not stupid enough to overlook that.

John Kasich, Jeb Bush, Marco Rubio, Ted Cruz, heck even Bobby Jindal- They have to be watching these debates and thinking about how they could have exploited Hillary Clinton's flaws far better than Trump.

Trump refused to sell out his base to the thieving murderous Hillary.

She got caught stealing the Democrat nomination from Bernie Sanders. Unlike Bernie Sanders, Trump isn't going to roll over and play dead with us.

Insofar as a "no fly zone" is concerned, Hillary couldn't keep flies from alighting on her sick decaying Parkinsons-riddled carcass. Putin isn't scared of US planes and won't cut a deal to allow Hillary to fly over Syria in any case. Putin could agree to sell Iran some nuclear weapons if Hillary "wins" and make it all a Trump victory.

Us Trump supporters support Trump because he destroyed the Republican establishment. Let him destroy the Empire as well and that will be fine. We are not mere cattle to be "won" through a game of democratic three-card monte.

Trump won a tactical victory in the debate but a strategic victory by refusing to roll over and accept a Democrat thievery of the election. Let you idiots worry about what happens when Hillary gets caught trying to steal the election.

Trump missed his last chance to expand his base and the electoral map continues to be stacked against him. He may have the most excited base in a long time, but it won't be enough.

Clinton is the second worst candidate to run for President in recent history, but is fortunate enough to be running against the worst.

Hellos RAndy,
You are ususally very astute and i agree and appreciate what you do.However on the debate you arme mostly ubibquiutily, and dead WRONG!!

First for the right stuff;

Chris Wallace was the greatest, smooth as silk.
Martha Raddatz in #2 should have been locked up to share a cell block with Hillary. A moderator or interviewer NEVER joins the debate and becomes part of the story, even if she does cover the Pentagon and know it very well. (Possibly to add a breaking point that nepotism connection or other major event that not everyone knew at the time)

Hillary is consistent--consistently criminal and a dishonest serpent.


Now for your many wrong points:

Trump won hands down. His command of the facts, foreign, domestic, and military were second to none. He was calm, cool, and collected, showing excellent temperament and leadership!Hillary continued to stand there and smile that phony smile inasmuch as she is a alight weight and does not know very much. Thirty years of experience and accomplished hardly anything but screw-ups. And of course 1,000% lying right down to every DNA and Chromosome in her ugly body.

He's and outsider and DC needs that. No more Clinton or Bush dynasties. (already proven with Ted Kennedy)

He also proved hs not afraid to stand up to any adversary in the World--no more fake Red Lines in the sand.

And lastly regarding the last question which was the media has decided was the most important, to wit: "I will look at it at the time",(paraphrased); quoted verbatim many times by Mike Pence sine. Thousands of American elections have been contested and not accepted, on a national level most recently in the year 2000, when Al Gore held on for 40+ days(even retracting his concession to George W Bush). He and some of his cohorts still do not accept the results today, only that the Supreme Court stopped the counting in Florida. BTW, they did win the popular vote nationwide.

it took 30 hours of brow beating by Richard Nixon's friend to convince him to finally concede, certainly not election night.

And of course one could go on and on and on.

And for Hillary's part after she loses the election she will be in no position to claim rigged and contest or ask for a recount.

"And for Hillary's part after she loses the election she will be in no position to claim rigged and contest or ask for a recount."

Ok I'll bite... which states will Trump win to get to/past 270 electoral votes?

The power base of this country will never allow Trump to take office, regardless of the outcome of the election. I am betting on heart attack or plane crash.

How do you keep your aluminum foil hat from chafing against your ears?