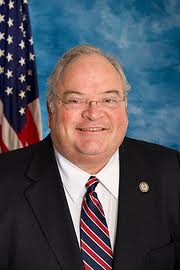 The biggest news to come out of Seventh District Congressman Billy Long's weekly interview with KZRG this morning was that he was in Springfield Wednesday night when the final presidential debate took place in his home away from home Las Vegas.

Long, who has yet to hold a town hall meeting in Joplin (or anywhere else for that matter) since he was first elected in 2010, told KZRG Morning News Watch host Chad Elliot he was headed to Joplin for events today.

"It's great to hear from the local people about what's going on."

Long also weighed in on the debate, declaring Trump was the hands-down winner.

"It was his best debate yet. I thought he did really well. He won it going away. People were texting me during the debate about how well he was doing and then you wake up the next morning and the mainstream media says Hillary won the debate last night. Can you believe that Donald J. Trump said maybe he wouldn't accept the election results?"

Long, who was one of the first Missouri politicans to endorse Trump said the election appears to be going well for his candidate. "Trump's staff is really encouraged by the numbers they are seeing."

But then again, he notes, if Trump loses, you can lay the blame on the doorstep of Speaker of the House Paul Ryan and the Republicans who are not behind Trump. "They care more about their own hides than the next 50 years in this country," he said, referring to Supreme Court justices the next president will likely appoint.
Posted by Randy at 9:38 AM

Trump is a carnival barking shyster that has managed to collect every racist, disgruntled worker, misogynist, and ill mannered person in this country into his corner. Included are local wackos Harvey Hutchinson and the commenter that redundantly italicizes your comment with his response. A presidential nominee that refuses to accept the results of a democratic election is not only unfit, but doesn't understand the lack of evidence on previous or past fraud in such elections. Anyone supporting Trump should seek counsel for the above mentioned phobias, and to those supporting him for party reasons, look the leaders in your own party's refusal of support.

Trump is the only Salvation for 'this country for the next 50 years!

What's the problem? Randy,
You're trying really hard to make a mountain out of a mole hill.
Billy Long's doing a lot better job than you could dream of!!

I wish "Anonymous " had the courage to identify
him( her)self?

Did you think the election was rigged when you got 13 votes running for city council? What is your fear? Black men? Muslims? Women? Trump fears them too, so don't feel alone. You are so full of yourself (like Trump) that you should put your money where your mouth is. How about a wager that Trump loses this election by a landslide. Most people are not ignorant and see Drumpf and Billy Long for the vile specimens of human beings they truly represent. Hero to deplorables only.

Hey Anonymous,
Al Gore did not accept his defeat for 36 days( kept it in Court, and recounting! Subsequent to that both Hillary and Biden were in tape refuting those results!
Actually he still hasn't really accepted the loss,

Harvey, evidently you have not talked to, see Bubba on TV or noticed that he is not a mole hill. Supporting Trump, Blunt and Long is such a insane idea and only goes to show people that your party is not or capable of intelligent thoughts. Well, I excuse that last statement as many in your party are fleeing the effects of what Trump has wrought on the good ol' boys network. Imagine Christy and Long together for a banquet for 100 and only 10-20 getting fed. What a image that will be stuck in my mind.

You seem to forget the election between Gore and Bush was not an issue of voter fraud as Drumpf is suggesting. The issue was an antiquated voting system with "hanging chads" and butterfly ballots. You won't read that in the Joplin Globe, USA Today did a story on that today, but nice try. I would suggest you try anonymity in public posts that support a man that 25% of Republcan leaders won't vote for due to his incompetence, demeanor, and a host of other reasons. Your future as an elected official will depend on you being wise, not a fool for a fraud.

Good evening Anonymous,
I hope you had a great day!

So you're saying in the 2000 election there was no voter fraud or rigged election; just mechanical problems in Florida with hanging chads?

Are you aware there are lots deceased people, and many I. The wrong State voting today?

Just a couple of weeks ago( I believe in Ohio) a young man from a registration group went out to his local cemetery and wrote over a dozen tombstones.
He almost got them all through, except that the Registrar of Voters had been a personal friend of one of them, and recalled recently attending the gentleman's funeral.

Hope this helps you!

I did have an excellent day and I hope yours was as well!

I am saying that there was little, if any voter fraud in the 2000 election. You might recall even though Gore won the popular vote total count, he still lost the election to the electoral college decision. So I am not sure how you claim fraud in such an election. I'm sure there are still dead people on voter registration offices in the US, does that mean someone has obtained their voter ID card and are using it? Nonsense! Please read this article which states over numerous bipartisan, government, and news organizations reviewed elections from 2000-2014 in which over one billion votes were cast, and only 31 cases were found to have occurred.

Thank you for the informative,
Any VOTER fraud is too much, Logically: why would they go to all the trouble to register the tombstones in the cemeteries with no intention of using them in VOTING?

Lastly, the crooked, colluded national media is the last automotive source I would want or accept.

There is a certain amount of fraud on both sides; but given the Veritas project Hillary's Democrats definitely win the prize!!

The New Yorker Magazine did an expose on Project Veritas in May of this year, and noted the deceptions of the conservative political activist that founded Veritas. They concluded it was of the same type of "investigation" as the Planned Parenthood videos proven to be false. I trust the 7 newspapers, 4 government inquiries, 2 news investigations, and 1 court ruling which all concluded voter fraud is almost nonexistent. If you choose to believe that Trump is " the only Salvation for this country for the next 50 years" then I would suggest you review your sources. FBI statistics show crime at an all time low and I believe them.

I do not subscribe to the pessimistic view Trump and some deplorables (white supremacists) have of our country. America is still great, and things have improved from when we were young. You remember when the cop would go to the home where a fight was reported, the cop looks at the woman with the black eye and shrugs, "Family business, no arrest". Do you remember when a black man couldn't drink from the same fountain as a white? That is where many Americans...Democrats, Independents, and a fair percentage of Republicans believe Trump will return us to live in.

The New Yorker Magazine is the most biased and bigoted magazine still in print. Veritas lays out the Money trial on tape ( remember Deep Throat), and it pleads right to the Clinton campaign and zfoundstion; fythrt collaborated on Podesta tape and Cramer himself300 visits to the White House), and the splice of a Democratic Congtesswoman.


This rigging hard for anyone to fight!

Anonymous have a good evening and nights sleep!

It'll be clearer in the morning!
Harvey

Two drinking fountains??? That's insanity to think of anyone; first place too expensive, not to think of morality and right & wrong!

You note correctly Hillary includes me in her basket of Deplorables, BTW that term came from the French Revolution, and Hitler use ldvit extendively while conducting the Holacist on the European Jews!


I think the only thing she regrets is not enough showers and ovens!

I hope you enjoy the rest of the Sabbath devoted to God Almighty!

I want you to recall America when Trump, yourself, and I were born, late 40's, early 50's. Do you recall the Jim Crow laws against blacks during that era? Do you recall when domestic violence was referred to as a "family matter"? Do you recall our country putting all Japanese citizens in internment camps, as Trump wants to do with Muslims? Do you recall orphan trains before LBJ gave us a safety net for families? Do you recall when LGBT people were beaten and unable to marry or have children? Is that the America that Trump and yourself thought great?

When a person refuses to believe his government, refuses to believe newspapers, refuses to believe in the courts, and only accepts FOX News as their only source of information, then I have little respect for such an opinion. Our country has became greater as we have rebuked the ideas listed above. G.H. W. Bush, the smart one, has endorsed Clinton, newspapers that haven't endorsed a Democrat in over a hundred years are now endorsing Clinton. It's not so much that she's a better candidate, it's because they fear the damage a demagogue such as Trump could cause our country.

I will enjoy my Sunday with family and hope your God Almightygives you comfort.

Randy your Headline "Billy Long Shocker"
Are you aware that Congressman Long's daughter has Cancer? And that one of the premier Medical facilities, Hughes Medical Center is located in Las Vegas?

Perhaps there is a good reason for Billy's time in Nevada?

Good morning Anonymous,
It seems that you like Hillary put in the basket of

I'll wager you; what's your definition ov a landslide?

45 states as in Goldwater?


Amount you have in mind?

How do I collect ( or pay) since you are anonymous?