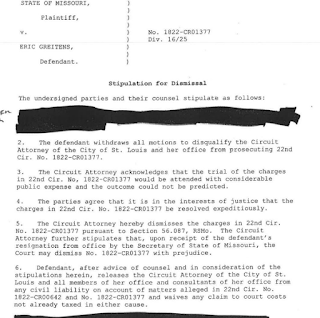 Today is the last full day that Eric Greitens will be governor of Missouri. His resignation is scheduled to take place at 5 p.m. Friday.

Reading the comments on KZRG's website makes me wonder if these people have ever actually paid any attention to what Greitens has accomplished during his year and a half in office.

Greitens spent much of his time out of state hobnobbing with wealthy potential contributors to lay the groundwork for a presidential race that will never happen.

He made few friends on either side of the aisle, instead concentrating on criticizing legislators for their corruption at the same time that the was operating a secretive administration and conducting much of the state's business using apps that destroyed messages so no record would be left of how he was managing or mismanaging taxpayer dollars.

Greitens exploited a loophole by having the commissioner of education fired by State Board of Education members who were never approved by the Senate. The governor has never explained why it was so important to remove Margery Vandeven from her post that he had be so secretive and his actions have left the state of Missouri without a board of education, a situation which hopefully Lt. Gov. Mike Parson will rectify quickly when he becomes governor.

Greitens never told us much of why he did anything. He did not do interviews with the media, preferring instead to deliver his messages through Facebook.

Of course, that pleased his supporters who throw themselves into a frenzy believing that the media are the root of all problems.

When it comes down to it, Greitens' entire approach to governing was to take the role of the savior who was going to ride in on a white horse and rid this state of all of the corruption that was holding it back.

Every one else was a problem. Only Greitens stood for what was right and good.

A lot of people bought into his act and are still buying into it, judging by the comments I am reading.

Greitens, following a national playbook, claimed that all allegations against him were part of a "witch hunt." and attacked the character of anyone who stood in his way.

That term "witch hunt" has been parroted in the KZRG comments, as well as attacks against the media and the "liberal Democrats" who ran Greitens out of office.

It would have been hard for "liberal Democrats" to have removed the governor since the Republicans have a veto-proof majority in both houses.

Some of the commenters, recognizing this flaw in logic, immediately referred to the Republicans who have played key roles in opposing Greitens as "RINOs" or Republicans in Name Only.

If that is the case, nearly every Republican officeholder in the state of Missouri is a RINO.

Greitens helped reinforce that thinking with his "poor me, I am resigning for my family and I never did anything wrong" statement.

There are some of the Greitens supporters who acknowledge that he had an affair and it was wrong, but almost immediately add that it would never have made a difference if it had been a Democrat.

It also would never have made a difference if it were just a consensual affair. The Republicans on the House Investigative Committee found the woman's story credible.

Of course, those are Republicans in name only.

I could be wrong. It may all be a witch hunt. Perhaps there is an organization that could prove Greitens was framed. Whatever happened to Seals for Truth?

KZRG = FAUX NEWS. The Republican witch hunt caught a republican witch that supposedly did no wrong but was very eager to resign when the judge requested paperwork that would undoubtedly show unethical practices. Do you not hold your elected officials responsible for their illegal actions? But I forget, republicans (especially these with high family values and morals) can get away with unethical, immoral and illegal behavior. Just look at the present outhouse, er......sorry, White House administration.

I agree. He committed no crime.

Good riddance to a bad apple who uses his military service for his own agenda of corruption. Sad to see the plea deal given by St Louis prosecutor, but is that not the way things are done. Now he is free to pursue more political jobs and more corrupt means to further his and the Koch Bros. right wing agenda. Let us not forget the damage done by our politicians following the agenda of ALEC. The most damaging group of the super rich to keep hard working blue collar workers in their place, subservient to their greed.