CJ's folly: Joplin Board to approve putting wrong-colored JHS bleachers up for bid 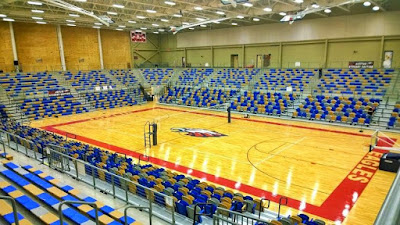 We never really had a chance to get to know them.

The wrong-colored bleachers originally installed in the new Joplin High School will soon be making their way to new owners- if anyone wants them.

The Joplin R-8 Board of Education will act Tuesday night on a recommendation from administration to sell the bleachers and folding seats as surplus property.

The 2014 Board of Education approved former Superintendent's C. J. Huff's proposal to spend approximately $100,000 of taxpayer money at the December 15, 2014 meeting. 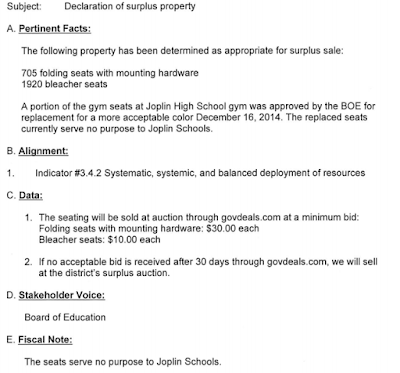 Huff buried the item on the consent agenda, meaning it would not be discussed at the meeting, though those plans changed when it was revealed in the December 12 Turner Report:

When the C. J. Huff Administration selected the colors, for some reason, they neglected to use the Joplin school colors.

That problem will be handled following Tuesday night's Joplin R-8 Board of Education, but at a cost of nearly $100,000 in taxpayer money.

You also will not hear the matter discussed during the televised portion of the board meeting or during the work session. The item, referred to in the board agenda as "Change Management #254- Bid Package #120- Gym Seating," is part of the board's consent agenda, meaning the board will vote on it along with several other items without discussion.

Carroll Seating will do the work at a cost of $95,206.17, according to board documents.

The reason the changes need to be made, according to the document is "colors of gym seats provided were deemed unacceptable."

The document does not indicate by whom it was deemed unacceptable nor how the C. J. Huff Administration allowed their citadel of 21st Century education to feature a Jumbotron-type device, but not have the school colors.

The money for the change in seating colors will be taken from the 2014-2015 Capital Outlay Budget, according to the document, which was signed off on by Building Program Director Mike Johnson and Superintendent C. J. Huff.

According to the proposal, the seats will be submitted to a government auction site and if they do not draw the minimum bid they will be offered for sale during the district's surplus equipment sale.

The proposal ends by saying what everyone already knew.

"The seats serve no purpose to Joplin Schools."
Posted by Randy at 11:45 AM

Are there rumors that Bright Futures will be bidding on these bleachers?

This is old news. No wonder why you had to start your own blog. Yes there was a color mistake, yet Joplin schools corrected it. It did cost money to fix the problem and they moved on. When will you move on Randy?