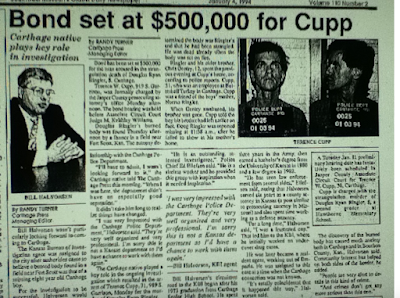 Research for my new book about my Newton County memories took me to the Carthage Public Library Thursday where I had a chance to relive one of the most hectic periods of my life- my first few weeks as managing editor of the Carthage Press.

All I was looking for was a column I wrote about an old friend from Granby, the late Willi Pierson, but as I searched for the column and eventually located it, I examined the microfilmed copies of papers from January through March of 1994.


I admit to being hesitant about doing so. Would the Press be as good as I remember it? Am I just one of those people who thinks that everything was done better back when I was doing it? 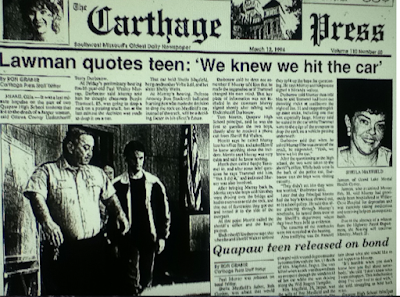 I probably am, but after looking at those newspapers I realized that anyone under the age of 40, probably does not remember the days when local newspapers in this area were jam packed with news, provided by skilled reporters.

This was the Carthage Press before GateHouse Media cannibalized it and turned a successful small-town newspaper that was published six days a week into a weekly that is barely hanging on (and is much better than by all rights it should be, thanks to the hard work of John Hacker).
I had been with the Press for nearly four years and had 17 years of newspaper experience when I became managing editor and I had to call on every bit of that experience.


During my first few weeks as managing editor, eight-year-old Hawthorne Elementary second grader Douglas Ryan Ringler, was murdered and an old friend from Jasper, Sheila Mayfield, was murdered by two Quapaw teens who threw a rock that crashed through her windshield.

The Press offered blanket coverage of those stories, but at the same time it was covering efforts to combine the Carthage police and fire departments into one Department of Public Safety, offered in-person coverage of city, school board and County Commission meetings, covered the schools, Chamber of Commerce, the arts community and anything else that was going on in Carthage, as well as covering major stories in surrounding communities.

As hard as it seems to believe now that GateHouse thinks two people can cover Carthage, we were worried because budget cuts had trimmed our staff to five people. Fortunately, those five people were capable of turning out not only copy, but compelling copy. Out of three months of newspapers I looked over Thursday, there were not any that did not offer a good read to the subscribers.

Ron Graber not only provided top-notch photos on nearly a daily basis, but his coverage of the preliminary hearing for Paul Murray, the teenager accused of murdering Sheila Mayfield, was a powerful read. Ron also helped us beat the Joplin Globe on a story through the use of solid old fashioned shoe leather reporting.

As an afternoon newspaper, we were constantly being beaten on coverage of night meetings by the morning Globe until Ron figured out a way around it.

So we ran the banner headline Tuesday- "Department of Public Safety: Stick a fork in it."

The publisher, Jim Farley, was not thrilled with the headline, but it turned out to be the right one. That night at the council meeting, Police Chief Ed Ellefsen who favored the Department of Public Safety, took his defeat good-naturedly, going as far as to bring a box of plastic forks to stick in the proposal. Ron took a photo of a smiling Ellefsen with the forks that run on page one of the Wednesday paper.

I was fortunate enough to also have the wisdom of experience of City Editor Jack Harshaw, who had been with the Press since 1952. In addition to handling our records page material, Jack, who had been on desk duty for years became a beat reporter again during his final year before retiring and thoroughly enjoyed it. Jack also wrote crisp, clear copy that never needed editing.


The sports editor was current Jasper County Sheriff Randee Kaiser. His sports page were award winning with solid coverage of every Carthage sport, while I helped with coverage of the junior high and ninth grade sports and high school girls varsity sports, as well as providing area coverage.

Kaiser was more than just a sports editor. He also was an award-winning photographer and provided some excellent articles in the first days of the investigation into Doug Ringler's disappearance through the discovery of the boy's burned body in a Kansas field.

Looking back over those papers, while Randee, Jack, Ron and I all did things to keep the readers informed on a wide variety of subjccts, the unquestioned star of the operation, though we did not realize it at the time was a 21-year-old lifestyles editor working at her first job after graduation.

Amy Lamb did more than run schools and clubs coverage. I have always said she was the best features writer who ever worked for me (and I was fortunate enough to have a number of good ones). Amy got her start early, going to work for me at age 15 at the Lamar Democrat and by the time she went to MU, she had already written features that would have made far more experienced reporters proud, including one on a cold case murder in Jerico Springs and another on the retirement of twin Highway Patrol troopers.

Amy wasted no time hitting the ground running at Carthage. She took over as lifestyles editor a couple of weeks into 1994 and covered the preliminary hearing for Terry Cupp, the man who killed Doug Ringler, as well as doing an insightful week-long series on local doctors.

The Press had two food columnists, a science columnist, Fergy's Follies, a well-loved column by Ron Ferguson, historical columns from Marvin VanGilder, and I was writing at least three and sometimes four columns a week.

And of the five members of the editorial staff, four were graduates of the University of Missouri School of Journalism. The fifth one-the one who is writing this post graduated from Missouri Southern State College with a bachelor of science in education.

The Carthage Press of 1994 was not perfect by any means. I saw things that I would handle differently now.

I would love to see that brand of journalism tried once again in this area. Maybe the Joplin Globe will try it someday.

This week's top posts for the Turner Report, Inside Joplin and Inside Joplin Obituaries are featured below and below that you will find PayPal buttons if you have not yet subscribed or contributed.

5. C. J.'s folly: Joplin Board to put wrong-colored bleachers up for bid

8. Seneca Board President: Eggleston's values and goals align with our district; he's a man of character and integrity

3. Joplin woman arrested on felony drug warrant after one-vehicle accident on I-49

Help the Turner Report/Inside Joplin continue to provide a much-needed alternative news source for the Joplin area. If you feel this independent news operation benefits you and this area, please consider taking a subscription or making a contribution of any amount by using the PayPal buttons below or by mailing a contribution to Randy Turner, 2306 E. 8th, Apt. G, Joplin, MO 64801

Sounds like an interesting book; good luck with it
Harvey Hutchinson 303-522-6622 voice&text