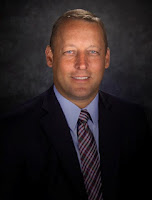 Joplin High School Principal Brandon Eggleston told staff this morning that he will be leaving the district to become superintendent of the Seneca R-7 School District.

Eggleston will replace Jim Cummins, who recently resigned to take over as Neosho R-5 superintendent following the resignation of Dan Decker.

Eggleston has been JHS principal for the past two years, following five years as North Middle School principal.

Definitely a step down from Cummins. No real experience and a diploma mill degree.