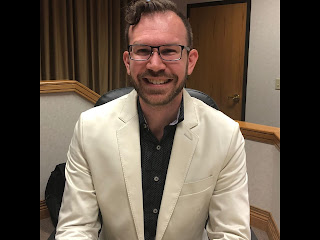 During a Special Meeting of the Joplin City Council, members chose Anthony Monteleone to fill the vacant General Seat on the Council. He will serve until the next City Council election in 2020. Monteleone ran in the April 2018 election, and received the next highest votes after winning candidates Ryan Stanley, Doug Lawson and Joshua Bard.

Monteleone has lived in Joplin most of his life. “My parents taught me to bloom where you’re planted, and this is where I’m planted,” he laughed. “I’m ready to serve our community.”

Following the election, City Clerk Barb Gollhofer swore Monteleone into office, and he took his chair at the dais. His first meeting will be the regularly scheduled Council meeting on Monday, June 4.

“We do appreciate all of our citizens for their support and participation in this process,” said Mayor Gary Shaw. “We look forward to working with Anthony. He brings some young blood to the Council and we’re all ready to work together.”

During the May 21, 2018 City Council meeting, six applicants spoke to the City Council to discuss their interest and qualifications to serve on the Council. They included Monteleone, Steve Urie, Christopher Briley, Harvey Hutchinson, Rocky Biggers and James Scott.

“We were pleased to have such strong applicants to step forward to serve Joplin,” said Shaw. “It is our hope that those who had expressed an interest for this Council seat will consider serving on one of the boards or commissions that helps our City in so many ways.”

The Council seat became vacant upon Josh Bard’s resignation from the Council. The Joplin City Council voted to accept his resignation at the April 27, 2018 Council meeting.
Posted by Randy at 8:19 PM

Anthony earned it. He got in the streets, he studied the policy, he made connections, and he cares a whole lot about our local businesses. I didn't know anything about the guy 6 months ago, but now he'll have my vote any day of the week.

At least it wasn't Harvey.