Hawley praises Trump's courage, his willingness to "stand up to our enemies overseas" 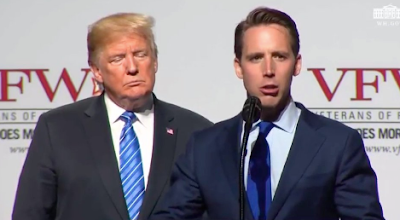 Standing beside the man who overcame bone spurs to become President of the United States, Attorney General Josh Hawley told those attending the VFW Convention in Kansas City a few moments ago the word that comes to his mind when he thinks of President Donald Trump.

"How about the leadership of President Trump?" Hawley asked. "What do you think?

"When I think of President Trump, one word comes to mind- courage."

Hawley praised Trump, who returned last week from a summit meeting with Russian President Vladimir Putin. "He continues to stand up to our enemies overseas.

Hawley said he would commit himself to helping the president's work in "making America great again."

Trump was also lavish in his praise of Hawley, who is running for the Republican nomination for the U. S. Senate seat currently held by Democrat Claire McCaskill.

Trump motioned for Hawley to come toward him. "Come here, Josh." Trump embraced him and shook his hand.

"This is a special man."

Thank you Missouri Republicans for giving us this simple minded idiot who can easily be beaten in a state wide race.

Josh, Can't you just stay quiet like your buddy Blobby Long? You kissed so much backside there you need to wipe the orange off your mouth.

"How about the leadership of President Trump?" Hawley asked. "What do you think?

"When I think of President Trump, one word comes to mind- courage." (courage = bone spurs or pussy grabber)

"He's providing the leadership this country needs." (must be confused with Russia)

Get 'em Joshy! Trump needs a new kitty. And another "Party Before Country" repugnican is born.

Harley is right, Trump courageously walked into that draft office and told them the pain of marching prohibited him from serving his country, right before going to the golf course. America has always been great, up until the racist, perverted Trump took office.

Sore losers always provide snide wimpy comments...Claire is DIRTY..USING HER OFFICE for her husband to exploit.

Now farmers may be given 12 billion in tax dollars because of the tariff impact ... Ironic from the anti-welfare folks ... Can't have those big corporate farmers hurt, right?

It's ironic that this little pinhead would praise Trump for "standing up to our enemies overseas" while addressing the VFW, Americans who actually DID stand up to our enemies overseas. Trump the draft dodger doesn't deserve to be in the same room with the men and women who fought for us. If Hawley believes what he said, he's lost in Trump's alternative reality. If he doesn't believe it and says it anyway, he's a miserable opportunist. Here is whom Trump has "stood up to" overseas--the UK, France, Germany, and NATO. Only in Trump's world would the UK, France, Germany, and NATO be considered our "enemies." Oh, and Canada. It isn't overseas, but we're told Canada is a threat to our national security. What about North Korea and Iran? you ask. Are unhinged Tweet Attacks "standing up" to them? How much courage does running off at the keyboard take? Russia? No standing up there for Trump. He didn't even stand up for our country.

Joshua Hawley will be s terrific US Senator!!

Harley is another "ifiot" just like Harvey! Most folks I talk to say "Anyone but Hawley" believe me, I hear it all the time, biggly yuuuuuuge!