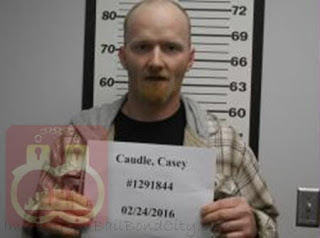 An Oronogo man was sentenced to 12 years in prison without parole today for receiving and distributing child pornography.

From the news release from the U. S. Attorney for the Western District of Missouri:

According to court documents, Casey Caudle, 35, Oronogo, was sending sexually explicit images of an 11-year-old victim, whom he falsely claimed to be his daughter that he was molesting. Caudle sent the images to an individual who reported it to law enforcement. Investigators found 49 images and 49 videos of child pornography on Caudle’s cell phone, including children as young as four or five years of age.

In a sentencing memorandum filed last week with the court, Caudle's attorney attempted to get a lesser sentence for his client by noting that "Mr. Caudle admits that he has and has had a serious drug problem dating back to age 13 years and leading him to start criminal behavior at a very early age. He attempted suicide by slitting his wrists at age 15, although he states no further attempts of suicide since that time and has no desire to self harm in the future."

The government pushed for a 15-year sentenced in a memorandum filed today:

The defendant came to the attention of law enforcement because he was sending sexually explicit images of an 11-year-old female who he (said) that he was molesting.

The defendant had sent the images to an individual who reported it to law enforcement. As the PSR (pre-sentence report) details, the defendant used KIK to exchange child  pornography.

The defendant was in possession of images and videos from 28 known victims identified by the National Center for Missing and Exploited Children. The Government respectfully recommends that a 180-month sentence is appropriate given the nature and circumstances of this case.

The Government believes that the number of images and the defendant’s cooperation with law enforcement support the variance it has recommended, while also accounting for the defendant’s portrayal of molesting his own daughter.

While on probation, the defendant also incurred violations for absconding, testing positive for methamphetamine and marijuana, failure to attend treatment, residency, and employment. There is very little to support any variance based upon the defendant’s history and characteristics.

The defendant has a lengthy criminal history, an unstable and sporadic work history, and a lifelong addiction to drugs. The defendant has four children, none of whom he supports. The defendant’s past demonstrates an individual who has been an unproductive member of this community, who has a complete disregard for the law, and shirks his responsibilities. The Government respectfully recommends a sentence of 180-months is appropriate given the history and characteristics of this defendant.
Posted by Randy at 3:05 PM

Unfortunately, he will continue his sick practices during or after his incarceration. Our children don’t appear to have enough value in our society.