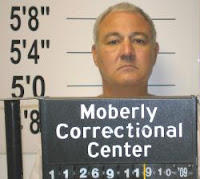 Meerwald,  63, Noel, who served prison time after pleading guilty to two counts of involuntary manslaughter in connection with the July 30, 2004 drunk driving deaths of Jessica Mann, 7, Joplin and her grandfather, Jim Dodson, 69, Neosho, was arrested June 17 by a Highway Patrol trooper and charged with felony driving while intoxicated and speeding.

Meerwald's initial appearance on the speeding charge is scheduled for July 30, exactly 14 years after the deaths of Jessica Mann and Jim Dodson.

In his bond reduction motion, Meerwald's attorney, William Weber, Pineville, noted that his client was "the sole support of his household," that he had been working at Simmons Foods and had always shown up for hearings in the past.

Weber says that Meerwald "maintains his innocence," would not attempt to flee and would abide by any conditions set by the court.

The events that led to Meerwald's arrest were outlined in the probable cause statement. Trooper Derek Carnagey said Meerwald was clocked doing 77 miles per hour in a 60 zone south of Split Log Road on MO 59.

"When I turned around and activated my emergency lights, the vehicle continued southbound at approximately the same speed. Eventually, the driver observed my patrol car and emergency lights behind him."

Meerwald told the trooper he had been to Joplin and was driving to his daughter's home. Carnagey smelled alcohol on his breath and asked if he had been drinking. Meerwald said he had two beers.

"I informed him two beers would definitely not place him anywhere near the legal limit."

According to the statement, Meerwald voluntarily provided a breath sample on the trooper's portable tester. Despite his claim that he had only two beers, Meerwald said he would fail the test. The sample registered .177, more than twice the legal limit.

Because of the test and Meerwald's statements, Carnagey asked him to perform further tests. "Meerwald claimed he had issues with both feet being previously broken, along with cellulitis in his legs causing swelling."

Carnagey placed Meerwald under arrest and took him to the Pineville Police Department for a chemical breath test.