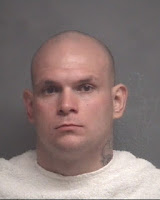 On the day he allegedly molested a 10-year-old girl, Blaine Downum was free on bond while awaiting trial on a charge of felony possession of a controlled substance.

The drug allegation was the seventh felony charge filed against Downum after he received a suspended sentence in Jasper County Circuit Court and was placed on five years supervised probation November 24, 2014, after pleading guilty to felony receiving stolen property. Two months earlier, he pleaded guilty to a misdemeanor domestic assault charge.

The Pittsburg, Kansas Police Department arrested Downum on six felony charges in connection with a 2015 incident in which Downum "used a handgun to rob someone of methamphetamine," according to a Pittsburg Morning Sun article.

Downum's freedom at the time of his crime not only potentially put a child at risk but also the Joplin Police Department officers who eventually arrested him.

According to a JPD news release, an officer was checking a residence near 8th and Turk in the late afternoon April 16, 2018, to see if Downum was there and saw him walking out of the house east on 6th Street.

The officer pulled up behind Downum, got out of his car and told Downum he was under arrest. Downum turned and began running.

The officer sent a K9 after him and Downum was taken into custody.

Things could have turned out much worse. When Downum was finally subdued, the officer discovered he was carrying a loaded handgun.

When the four felony charges were filed against Downum, it made 11 he had been charged with while serving a supervised probation.
Posted by Randy at 7:24 PM

No one listened to the little girl when she needed you the most. Not her mom not her grandma not her dads best friends mom who she called grandma. Blaine was and always will be a pos. Amanda you are to blame, karen you are to blame, Robert you are to blame, law enforcement,and dfs you failed these kids. I pray Blaine is put away for lots of yrs. He is a habitual offender and loves prison.

Follow his case on case net, bet he gets off again. This is what is wrong with this area, the cops keep busting the same people and the courts keep letting them go. Wake up people!

Why do they always get to drop the child endangerment charge?