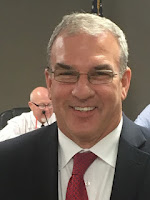 It has been just over 100 days since I took the job as Neosho’s City Manager and it is an opportune time to give the citizens of Neosho my assessment of the state of Neosho.

Before I dwell into the issues facing the city, I want to express my heartfelt gratitude for the welcome and outpouring of support that my wife and I have received from the citizens, business community, and the employees of the City of Neosho. Neosho is truly a great, All American community.

Before applying for the city manager position, I did my research on the city, and I looked at census data, history of the city, its form of government, and any available information that I could find.

What I discovered is that the city is not unlike countless other small cities across America and has its strengths and weakness. The biggest takeaway from my research is the pride the Neosho’s citizens have for their city. I must say that after 100 plus days with the City of Neosho, that has been reinforced on a daily basis. The citizens that I have met have a true love for their city and want to become involved to preserve Neosho’s history and culture.


The business community is strong and is working to increase economic development in the community and surrounding areas. Grow Neosho, and the Neosho Chamber of Commerce are major players in driving Neosho’s economic development. The Chamber of Commerce should be commended for their marketing efforts on behalf of its citizens. The arts community in Neosho is phenomenal, and as a city, we need to embrace the arts.

With a collaborative effort between the Neosho Arts Council, Neosho Chamber of Commerce, the business community, citizens, and the city, the arts community has the potential to become an economic force in the city.

The Historic Neosho Downtown District is a true gem of the city, and very it is encouraging to see grand old buildings such as the McGinty building being revitalized. Again, can collaborative effort’s between the city, the business community, Newton County Historical Society, citizens, the arts community, and other stakeholders lead to increased opportunities in preserving the city’s historical gems. Crowder College and the Neosho School District are leaders in workforce development and educating the future of Neosho.

On behalf of the dedicated and hard-working City of Neosho employees, we are excited about the future of Neosho and look forward to working with all stakeholders to make Neosho better place to live, work, and raise a family.

I would be amiss if I failed to address the challenges facing the city. The greatest issue facing the city is the failure to maintain the aging infrastructure, mainly the water distribution and sewage collection systems.

The issue of aging infrastructure is not unique to Neosho. The water loss rate from leaks in the water distribution system is astronomical and placing band-aids on the system is not resolving the issues. The sewer collection system originally designed in the early 1940s and while it has had some upgrades in the past, is nearing capacity as a result of growth in some areas.


The Police Department building and Fire Station One are in need of replacement.

The Parks and Recreation Department does a phenomenal job maintaining the parks and running the recreation programs, considering the available resources. The city is attempting to learn from the citizens if the city needs a dog park, splash pad, mountain bike trail, expanded disc golf course, or other recreational opportunities? We need our stakeholders' input to determine if were are providing the right mix of recreation for our citizens. Also, can we partner with the YMCA, Neosho School District, Crowder College to recreational opportunities for all? I have found that Neosho’s golf course itself is awesome and the Golf Course Board is in the process of making recommendations for improving the golf course.

I cannot leave without addressing our city employees. The city employees are hard-working, dedicated employees who have a deep passion for the city and wand to deliver the services that our citizens want and deserve.

The city is initiating a Neosho Citizens Academy starting at the end of January that will run one night a week for eight weeks. Each department will explain their role in the city and be available for questions.

I urge all Neosho citizens to take advantage of this opportunity to learn about how the City of Neosho governments operates and laws that govern how the city operates. The city is also undergoing a strategic planning process and will be holding public forums to get the citizens, and other stakeholders view on how to address the issues facing the city and hear your views on ways to improve the delivery of services.
Posted by Randy at 7:36 PM

All that you said is true and Neosho is or was a fine city. The last 10-15 years the schools system has failed the teachers and students and the blame rest solely on the parents who did not demand proper oversight. What you say about infrastructure is correct and it has been and is the fault of politicians, mainly republican led, to not raise taxes to sufficiently update facilities to meet demands and regulations of protecting the citizens. Higher taxes are not palatable to working citizens, but low wages and lack of technological job expansion has been the main cause of stagnation in Neosho and even in Joplin. They favor the chicken industry over technology and recruiting science based employment. They have favored keeping the "kids" on the farm and working like horses instead of using their head and discovering that environmental and diversification of species will do more to enhance and improve a city's overall well being. So, your thoughts are correct, but the residents are not prepared mentally or monetarily for what you proposed to bring Neosho into the 21st Century. We might now have a great educational leader, but revamping a system so ruined will take decades to rebuild. One note: why are we still building schools with flat roofs by the same contractor that leak or have structural problems so soon after they are finished?