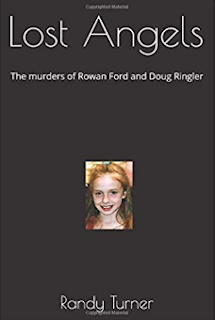 Two children, two communities gripped with fear as the children vanished only to be found brutally murdered.

The new book Lost Angels: The Murders of Rowan Ford and Doug Ringler tells the stories of the murders of two children and how the people of Stella and Carthage feared the strangers who would commit such crimes, only to find out that the strangers were people who had been living among them all along.

Lost Angels, which just became available this morning at Amazon, examines both cases offering descriptions of the communities of Carthage on December 28, 1993 when Doug Ringler, 8, a third grader at Hawthorne Elementary in Carthage was reported missing and Stella on November 2, 2007, when Colleen Spears returned to her home after working the overnight shift at the Wal-Mart store in Jane to find her daughter Rowan Ford, 9, a fourth grader at Triway Elementary, had disappeared.

The book takes readers through the searches for the children, the discoveries of what happened to them, the investigations that led to the arrests of the killers and provides an examination of how the judicial system dealt with those killers.

At this point, I do not expect to have the book available at local retail outlets until sometime late in February, but it can be ordered through Amazon at the link below.

I would hope that both of these families receive a piece of the proceeds.

They won't. Doesn't work that way.