Detention motion: Galena man charged with meth trafficking should be held without bond 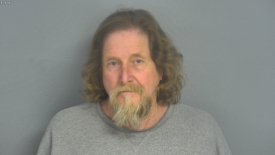 In a detention motion filed today in U. S. District Court for the Western District of Missouri, an assistant U. S. attorney asked that Carroll Flowers, 68, Galena, Kansas, who was indicted by a federal grand jury on meth trafficking charges be held without bond:

Flowers has a prior State of Missouri felony conviction for distribution of a controlled substance and a prior federal conviction for conspiracy to distribute methamphetamine.

In his prior federal case, the United States District Court for the District of Kansas sentenced Flowers to a 20-year term of imprisonment.

In the instant offense, law enforcement officers found approximately $2,731 in U.S. currency and 83.1 grams of pure methamphetamine on Flowers’ person. For the reasons set forth above, the United States requests that a detention hearing be held and that the defendant be denied bail.

No date has been set for the hearing.
Posted by Randy at 5:37 PM

He was given a "Second Chance" and at 68 years old, still didn't realize what a gift it was.
Too bad for him.
Now he will die in prison.

He deserves what he gets, good man or not. Commit the crime do the time. He even had a 2nd chance and blew that.

Let's all remember this man has a family, and our careless comments may hurt them at a time when they are already hurting plenty. What satistfaction do you get by posting these negative comments? Keep them to yourself.

The most effective thing to do is pray. Not judge.

look all you GODLY folks, this man is NOT guilty until he is convicted. I am betting that if your little Johnny or whomever you gave birth to was in this situation you wouldn't be slamming him away for the rest of his life. If you don't know all the facts please keep your thoughts to yourself.

I never said he deserves to die in prison. I said it is too bad he didn't learn from his past and now chances are he will die in prison.
He is 68 years old. He should have learned by now .

I don’t know this guy. What I do know is the devastation meth does to families. Maybe if all the drug pushers actually served some hard time it wouldn’t be so readily available and would be to expensive to buy. I believe in second chances. I also believe a tiger rarely changes its stripes.

I have sympathy for his family. Their suffering is an example of the collateral damage meth does to the families. There’s also all the damage done to those he sold to, so on and so on.