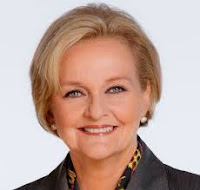 This probably will come as no surprise to anyone, but former Sen. Claire McCaskill, D-MO, who was defeated in her bid for a third six-year term by Josh Hawley in November, announced a few minutes ago on Morning Joe on MSNBC that she has joined that network and its parent network NBC as a political analyst.

The first information McCaskill relayed to the viewing audience is that defensive standout Eric Berry, who has been out with an injury, may be back in the lineup when the Kansas City Chiefs play host to New England Sunday in the AFC Championship Game.

CNBC reported Monday that former Ohio Gov. John Kasich, who is also mulling a 2020 primary challenge to President Trump, has been in talks with NBC/MSNBC and CNN. Kasich will not be talking with Fox News, where his weekend show Heartland with John Kasich ran from 2001 to 2007.
Posted by Randy at 4:13 AM

Well, Cliar will feel right at home with Morning Zika and Psycho-Joe Scarburro in railing against Drumpf and the Corporate Meercat that whupped her bad by six points. She was able to impersonate a human being far better than Howdy-Doody Hawley but after two terms a vast majority of us voted that it was time to go. Now Missouri has two Corporate Senaturds.

M$NBC in general and Morning Joe used to be so funny back in 2015-16 when Drumpf would call them every morning after a debate because they imagined that the God-Emperor Drumpf would lose to Crooked Hillary. Maximum big surprise on Election Day, as went the song by Arcadia.

Now with all theys' screetching and scheming and Strolnyk-satannic faces they are even more tiresome than listening to fingernails across a blackboard.


Any thing is better than moving back to the Midwest for Claire.

At the Barr hearing today, Hawley was asking questions and Barr answered immediately with yes to all of them. Surely Hawley had not given Barr a copy of those questions ahead of time? Also why is Hawley on the Judiciary committee when he is being investigated for campaign violations which seems like something that would prevent his serving on any committee? Funny how so many crooks are prevalent in the republican party serving at the "pleasure" of Trump and his "collusion" cabinet and staff.

She was their clone before....joke is tv media is just an extension of political views regardless of viewpoint

Bahahah....analyst. she was clueless. Just tuck your tail and go away. Hawley is a schmuck but people are willing to give him a try over you??!! YIKES!

Shingle is Vomit ridden MSNBC, the first S is McCaskill, and I’ll let you figure out the literal interpretation of the first S.

That's all kind of rude, just thinking about what word was being hinted at. Disgusting and I kind of lost my taste for all those BK hamberders I was going to be eating. I hope you haven't been binging on energy drinks (or worse!) It just seems like you are more wee wee'd up than usual.

PS-wondering what you thought about the statement Billy Long issued about Steve King losing all his assignments?

Harvey is probably gearing up for another city council race. He’s preaching to his base, all 47 of them, in his efforts to show his machismo. Although he is only 5’ 5” tall and weighs 180 lbs., he is every bit as vile as a 6’ tall 280 lb. Trump. Give him some credit, he got most of the saying correct, although “shit on a shingle” refers to chipped beef on toast that was served to veterans on World War II. If you take the literal interpretation, he’s referring to Clair as an entree, which leads one to believe that he wants to eat her. Harvey hails from Louisiana, where they eat “mudbugs”, so it is definitely a step up from his usual cuisine.

2:25, that's politics. What is really funny is that you think "crooks" are more prevalent in the Republican party.

At least Harvey has the balls to stand up for what he believes and run for city council. I would bet 939 and 1150 lob verbal grenades from their Cheeto stained couches in between swigs of cheap beer as they try to unwind from their "stressful" $30,000 a year jobs. Pathetic little men who are afraid of someone with a different point of view. "Oh look at that guy who tries to serve his community! What a loser! "