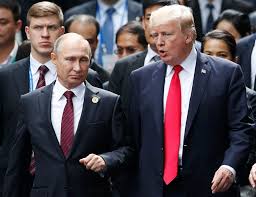 The Facebook comments on the Springfield News-Leader and KZRG pages were in overdrive following the New York Times report that the FBI opened an investigation into whether President Trump was working with the Russians.

Some of the comments are printed below with my responses in italic.

The entire agency needs to be gutted, and start over from scratch. People with any common sense, know where the corruption and collusion is coming from

I totally agree. Why do we need a federal agency that thinks it is important to make sure our president is not working for Russia. The money we save could be used to lower taxes for billionaires.

Unprecedented attack on democracy by leftist forces embedded in the justice department.

Now wait a minute. I thought the common wisdom was that leftists are Communists and they are the ones who are working for Russia. Why didn't I get the memo?


Sure doesn't feel like he is helping Russia seems more like the democrats are and they are helping isis and ms13 and the Mexican cartels plus cop killers and rapist .

I have never seen one positive article about our president. The newsleader is nothing but a propaganda arm for the DNC.

Maybe because there is nothing positive to report?


Definition of propaganda arm- Someone who writes something you don't like. I disagree with the second remark as well. When something positive has happened in the Trump Administration, it has been reported, but it is not the media's job to try to balance the scales when the scales are not balanced.

maybe record low unemployment. Lowest unemployment in history for blacks, Hispanic and women. The strong dollar and incredible stock market. More money in the pockets of Americans from the tax bill. All he’s done for the military. All this has cost us nothing as he doesn’t get paid. By the way he’s taken less days off than any president in modern history.

He is right. It is a positive that Trump is getting paid fairly for what he has accomplished.


News leader is bias and Scum

The Associated Press is expected to change its guidebook next year to capitalize all uses of the word "Scum."

Cant wait till Hillary and Obama are investigated. Left will go crazy

It is just a crime that Hillary has never been investigated.

This is becoming comical now. They just don't have the ability to accept the fact that Trump is their POTUS

A message to Trump opponents- No matter what you think the acronym POTUS should not be reduced by two letters.
Posted by Randy at 8:51 AM

The area derp is deep.

Just look at the dull tools that they vote into office.

10:39, why not remove your intellectually superior self from the area? Why punish yourself? Pack your knapsack and head to a coast.

These comments are explanation of why Billy Long is still in office.

Why not just split the county in two, at the Rocky Mountain Chain (you can keep Alaska) and both go our separate ways? Actually it is closer than you think.

Are they? In what way?