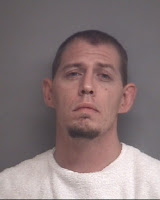 The suspect in the January 11 murder of Shawn Rockers, 27, Joplin, was arrested tonight in the state of Washington, according to a Joplin Police Department news release.

Joplin Police Detectives had determined Michael Osborne had fled the area and was headed to Washington. They contacted the United States Marshals Service for assistance. The Marshals were able to track down and arrest Osborne without incident. We appreciate the US Marshals for their assistance and any law enforcement in Washington who assisted them. More information will follow tomorrow as this happened moments ago. We wanted the community to know, and we appreciate the community support and help.

A $1 million cash bond was set earlier for Osborne.
The probable cause statement filed in Jasper County Circuit Court say witnesses indicate Osborne, 32, not only stabbed Rockers to death, but threatened to kill him a week earlier at the same address at which the murder took place.

On 1-11-2019 at 302 S. Connor Ave. in Joplin, Jasper County, Missouri, Michael J. Osborne committed the offense of murder in the first degree and armed criminal action.

Osborne committed murder in the first degree by stabbing victim Shawn Rockers in the chest with a knife.

Roberts was transported to Freeman Hospital where he passed away due to the extent of the injury from the knife wound. A witness on scene observed Osborne stab Rockers in the chest with the knife. The witness was able to positively identify Osborne through a photo lineup.

(Another) witness stated that Osborne was at the residence of 302 S. Connor approximately seven days ago and had an altercation with Rockers. (She) said she heard Osborne state that he was going to kill Rockers.
Posted by Randy at 8:33 PM