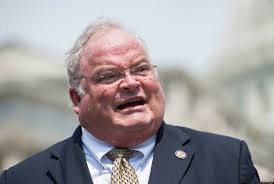 During the first three months of 2018, contributors to Seventh District Congressman Billy Long's campaign paid for him to take two more trips to Las Vegas and eat 83 meals totaling $7,931.68.

The number of trips Long took to Sin City, to put it into perspective, is two more than the number of town hall meetings he has held since first taking office in January 2011.

Long was in Las Vegas February 5-7 and January 16, according to the report.

Southwest Steakhouse, also located at Wynn Las Vegas, offers such cuisine as the chili-rubbed double rib eye (a particular delight for those who hate to have to rub their own chili on their rib eyes), which was featured on the Food Network's "Best Thing I Ever Ate," according to the restaurant's website.

Long's January Las Vegas stay was at the Wynn Las Vegas, where only $55.09 was spent on lodging.

The largest expense for meals on the report was $1,370.57 at Domenico's Italian Restaurant in Jefferson City on February 28.

Does this person realize or not what this means to people who are etching out a living to pay for rent, utilities and food in his district. What about this person allows him to get voted in year after year by the mindless in Missouri. This person is the personification of "fat cat politician" for all times. Shame on you republicans, religious leaders and voters in Missouri who allow this person to eat at the so-called "public pig trough" in America. Sickens me to see this brought out, but my thanks for Randy to keep this on the forefront.

We're these trips part of his job or were they personal. A little excessive in the meals. What happened to the people in government who watched every penny of the money they spent that so many others in their state worked so hard for?

This hog don't fall far from the trough. Maybe we should move the trough to Missouri so Billy Blob can eat some home cookin! Save us tax payers some money to pay for that wall!

Repugnicans are in control now. Don't you worry about spending. They are DEFICIT HAWKS! By keeping the rich and corporations from paying taxes like the rest of us, they can cut all that frivolous spending for social security, medicare and medicaid! Wait till they raise the gasoline tax and start taxing mileage. Besides, Missouri's economy is great thanks to our "R"s taking care of the rich. Someday, after they purchase all the stock they want, pay their CEOs and upper management their million dollar bonuses and pay off the politicians from their massive tax cuts, there may be a few cents left to do something for the little guy. Like leave a $2.00 tip after the buffet!

Ummm - Believe the center of our government to which Long was elected meets in Washington DC. Suppose he could be lost and stopped to eat and rest while on his way to meet his constituents in SW Missouri ...

A real-life Boss Hogg. Can't we do better for Missouri?

Correct me if I am wrong, but isnt Vegas a long way away from his district in SW MO? Sounds like its time to vote him OUT!

I am NOT defending him AT ALL, but clarifying.....it wasn’t taxpayer money he spent, thank goodness.

With the debt ceiling approaching, Congressman Billy Long shows where his priorities. The first bill Congressman Long sponsors in Congress doesn't cut any federal spending, it many in fact produce a minor increase in spending, and it definitely pats Congressman Long on the back for his 30 years in small business. The first bill Billy Long sponsors in Congress is setting aside the third Saturday in April to celebrate National Auctioneer Day, this comes just a few weeks after fed up with government spending Long voted to continue federal funding for NASCAR teams.

How about reporting what other congressman spend rather than singling out one person,

@ 6:56 AM. Ummmmm, yeah that's the ticket. Yeah. Lost, hungry and tired. That's it. I would think after all the times he has been there and back he would know the way by now. Starvation does that to a feller!

To Anonymous 5:51, I report more on Billy Long because he happens to be the Congressman who serves 90 percent or more of my readers. I have also pored over reports for other Missouri Congress members. As of yet, I have not found anyone who spent as much money on meals as Billy Long and none of them have their campaign contributors pay for multiple junkets to Las Vegas every year.

Y'all are awful hard on Kernal Long.

We appreciate the coverage, Randy. Keep up the good work! How else would we know?

Give me a freaking break. If you don't think Democrats do the same thing on the taxpayer dime and think again. Printer always chooses to list Billy long because he represents the area but they all do it and if you don't realize that you're clueless.

Yeah but, Long is the only one of them that we can vote out of office.

Regarding one of the comments: How does he get elected? He is a Republican. Many voters in the Seventh District look the elephant and cast their votes for everyone under it, not realizing that they are voting against their personal interests and loves. For example, when I was in Newton County, we Democrats gave out candy on Halloween. There were parents who would not let their children come near us because we were DEMOCRATS. It is so difficult to understand how Long, Blunt, Trump, Greitens, and others have such a grip on the Seventh District. Hopefully, the next generation will see the error of their parents' ways and vote out these greedy, self-centered Republicans whose only goal is to help the one-percent and pad their own pockets.

It's all that Obummy feller's fault. (That theres what our president Forrest Trump says) Billy Blob dun gots a "R" aside his name so that there is who we vote fur! If'n they gots some other letter a hangin' out there we don't go votin' fer them cause we don't rightly know what letter that is. Sides, he reminds me of Boss Hog on that there Duke boys show. Redneck heaven right there. Cars 'n guns. Just don't git no better'n at. Yee Friggin Haw! Make 'Murica Grate Agin!!

This is one of the stupidest thing I've ever seen on this blog and I have seen many. I have now lost 2 IQ points just reading it.

Hey Jim Bob Billy. Lemme tell you a one I heard a while back.

The reason rebiblican jeebus put the R in the middle of NRA is to remind us to vote R or else them people comin for us and our guns!!

They gonna hafta pry my gun from my cold dead fingers just like that there Moses feller said! Them NRAs are needing our help big time! Not sure what billyuns is but I heard that's what they gots! Must be painful like bunyuns or somethin! We keep a sendin' money to help out. Hell, maw is down to 3 toofus cause we cain't ford no dentist but she is a trooper. Willin' to sacrifice for Makin Murica Grate Agin!

From the man who advised me on "Fiscal Responsibility" when I wrote him asking to continue funding for medical research for type 1 diabetes and Multiple Sclerosis. Wow!