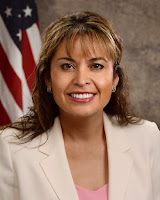 (From the Missouri Veterans Commission)
Following a national search and extensive review, the Missouri Veterans Commission announced that Colonel Grace Link has been named executive director of the commission which serves 485,000 Veterans of the state through the selfless service of 1,750 employees in seven State Veterans Homes, five State Veterans Cemeteries, and its Veterans Services Program.
The Veterans Commission selected Link last evening in a specially called commission meeting that was conducted by conference call.
Link, a Missouri National Guard colonel with 31 years of service, was appointed as interim executive director of the Missouri Veterans Commission on December 13, 2017.
“As interim executive director, Colonel Link has tirelessly devoted herself to making sure Missouri’s heroes get the care they deserve and are treated with respect and dignity,” Tim Noonan, Missouri Veterans Commission Chairman said. “She has made some tough calls. Grace not only understands that caring for the over 1,300 Missouri Veterans in our homes is a sacred trust, she recognizes that we have to take care of the people who take care of our Veterans. She is driving new levels of transparency and open communications among all stakeholders that include the commissioners, Veterans, their families, Veterans Service Organizations, volunteers, and all 1,750 teammates. She is changing the culture not just at our homes, but throughout the entire organization. Our goal is to be the best state for Veterans in the nation.”
“After more than three decades in the National Guard and assignments that ranged from logistics to operations overseas and most recently Director of Staff for the Missouri Air National Guard, I wasn’t sure what to expect when I was tasked with leading the Veterans Commission on an interim basis,” Link said. “Over the last four months, I have come to love MVC’s mission – the daily challenges, the committed employees, and most of all, the Veterans and their families!  I can think of no better way to continue my military career than to help ensure the men and women, with whom I served, get the attention and care they deserve. I feel really blessed and very excited to be able to serve our veterans!”
Link is the first woman to serve as executive director of the Missouri Veterans Commission. She earned a B.S. degree in electronics engineering technology from Missouri Western State University and an M.S. degree in civil engineering from Oklahoma State University.
Posted by Randy at 8:27 AM