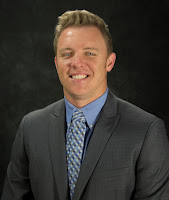 “Irving has consistently improved under the leadership of Ms. Sarah Mwangi and Mr. Josh Depoe. The two have worked lockstep alongside one another in service to Irving’s students, faculty and staff,” said Dr. Moss, Superintendent. “

As Sarah transitions her talents in service to the entire district, I am pleased with the depth of leadership in Josh. This allowed us to promote from within and keep Irving’s positive momentum through consistent leadership” Moss added.

Prior to joining Irving Elementary School, Mr. Depoe served as a classroom teacher for six years and a physical education teacher for four years in Neosho. In addition to his classroom experience, he served as a Neosho football, basketball, and track coach for ten years.

Nice guy
Kids seem to like him
And I have noticed a big difference with the school since Sarah was named principal. Great job

Wow, something positive finally coming out of Joplin. It's a bonafide freaking miracle.

You need to get out more, 10:06, instead of just reading this blog. There are lots of good things happening in Joplin.

Mr. Depoe was spent 10 years in Neosho School District. An outstanding teacher whose intelligence & creativity was obvious in the classroom, highly ethical with a student's first attitude. Neosho hired administrators from outside the district and lost another good one by losing Mr. Depoe. Congratulations Joplin! Congratulation Mr. Depoe!!! I'm so glad you are someplace that appreciates you and recognizes your heart for kids!