From 1998: Victim of drunk driving accident has lasting effect on Seneca coach 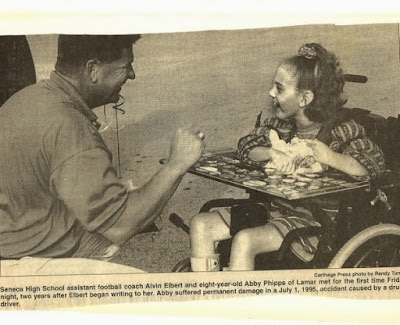 Some stories stay fresh in a reporter's memory no matter how many years pass.

One of those stories for me was the July 1, 1995 drunk driving accident that killed an eight-year-old Lamar girl and permanently disabled her five-year-old sister and her father.

The drunk driver, a man named Neley Milner, had managed to collect nearly two dozen drunk driving arrests, but was still on the road and was driving more than 100 miles per hour when he rammed his vehicle into the back of a truck carrying the Phipps family of Lamar.

Milner was eventually sentenced to 40 years in prison, where he died about six years ago.


During the last few years I was at the Carthage Press, I wrote numerous articles following court actions and appeals in Milner's case, but the article that still stays with me, is one from 1998, that is revisited in my book The Best of Sports Talk.

I received a call from my friend Nancy Hughes, at the time the Lamar school nurse telling me that a special meeting was going to take place at the school on a Friday afternoon. When she explained what was going on, I made it a point to be there and this was what I wrote afterward.


But you couldn’t blame Alvin Elbert for getting a little misty. Two hours before his Seneca Indians played Lamar Friday night, the assistant coach met an old friend…for the first time.

Abby Phipps was in her prettiest dress and brought a football-shaped balloon with her as she prepared to meet the man whose letters have been eagerly anticipated at her home for the past two years.

The coach watched as the Phipps family’s specially-equipped van pulled up to the curb beside the Lamar Elementary School gymnasium. The side panel opened and Connie Phipps, eight-year-old Abby’s mother, helped lower Abby’s wheelchair to the street.

A smile crossed Alvin’s face as he saw little Abby coming toward him, the football-shaped balloon tied to the arm of her wheelchair.

It was a little over three years ago, July 1, 1995, when the members of the Phipps family had their lives changed forever when a drunk driver going in excess of 100 miles per hour, rammed into the back of their vehicle.

Through all of the pain and suffering she has gone through, Abby has never lost her smile and has been a source of inspiration for her family through the difficult times.

A year after the accident as Abby’s family prepared for her sixth birthday, they organized a card shower for her. It was well publicized in area newspapers and one of those who read about their plan was Alvin Elbert.

“I teach a Sunday school class in Seneca,” he said, “and when I heard about this little girl and what she had been through, I had my class send her cards.”

After Abby celebrated her sixth birthday, Alvin’s letters kept coming. “He has been wonderful,” Connie Phipps said. “He’s told us all about his family and his farm and working on his house. Every time we get a letter from him, it brings a smile to Abby’s face.”

But until Friday night, the two had never met face to face. “She has been really excited about it,” Connie said.

During telephone conversations, Connie had told Alvin about how he made Abby smile. “Now I’ll be able to picture that smile,” he said.

Alvin walked toward Abby, a big smile covering his face and talked with her for a few minutes.
He bent down, gave her a hug, and told her he would see her at the game.

The Phipps family is Lamar through and through, but on this particular evening there would be two members of the Tigers’ arch-rival Seneca team, Alvin and his daughter, Holly, a cheerleader, who would be the focus of their applause.

As the Phipps van pulled out, Alvin Elbert, still smiling, but with a slight trace of moisture evident beneath his eyes, said, “That’s a great family. She’s a great girl.

“Did you see that smile?”

We all know football coaches don’t cry. It must have been the humidity.
Posted by Randy at 3:58 AM

Thank you for sharing your tribute. Wishing the family peace.

Alvin Elbert was my bb coach in 8th grade over 30 years ago. He and his family have always been great people. The world needs more people like the Elberts.