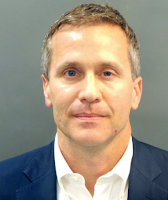 The calls for Gov. Eric Greitens resignation continue to grow following the release of a House committee report including graphic allegations of blackmail and violence against his former hairdresser in 2015.

Attorney General Josh Hawley called for Greitens to stop down, as did State Auditor Nicole Galloway, the only Democrat holding a statewide office and former Lt. Gov. Peter Kinder, a Republican.

Among those who tweeted or issued statements

Attorney General Josh Hawley- The House Investigative Committee’s Report contains shocking, substantial, and corroborated evidence of wrongdoing by Governor Greitens. The conduct the Report details is certainly impeachable, in my judgment, and the House is well within its rights to proceed on that front. But the people of Missouri should not be put through that ordeal. Governor Greitens should resign immediately

State Auditor Nicole Galloway- Eric Greitens needs to summon the integrity to resign. The Governor’s indefensible actions and the embarrassment he continues to bring to Missouri are causing deep harm to our state.

Former Secretary of State Jason Kander- Lack of transparency. Abuse of power. Campaign violations. Sexual assault. Pick your reason, @EricGreitens, but it’s long past time for you to leave office. And to any Republican elected official who disagrees: You can go with him.

Young Democrats of Missouri- If the governor refuses to do the right thing and step down from his office, it is time for our legislature to step up and put Missouri values to work by moving forward toward impeachment.

House Minority Leader Gail McCann Beatty, D-Kansas City- For the good of the state, Eric Greitens must immediately resign. If he doesn’t, it will be the duty of the House of Representatives to restore integrity to the executive branch of state government.

Former Lt. Gov. Peter Kinder- As he campaigned for governor, Eric Greitens decried corruption in our state Capitol and pledged to be the cleansing agent against that corruption, all the while upholding honor, dignity and clean government. This included a debate lecture to me about a time, decades earlier, when I’d failed to live up to that standard. When he won the primary and general elections, and then as he took office, we Republicans hoped for the best. Those hopes have been dashed into bitter disappointment. Because of his actions, and for no other reason, his capacity for the leadership our state needs has drained away. Accordingly, and with great sadness, I ask that Gov. Greitens resign his office or, failing that, I call on my friends in the House of Representatives to commence impeachment as provided in the Constitution.”

Rep. Caleb Rowden, R-Columbia- Should the governor fail to resign immediately, for the good of our state and our principles, I believe the Missouri House should move swiftly toward impeachment.

Rep. Kevin Corlew, R-Kansas City-
For the good of our state and the ideals we stand for, I renew my call for Eric Greitens immediately to resign as governor. I also call upon my legislative colleagues to seriously consider impeachment under the Missouri State Constitution.

Embarrassed for the state and his family.

According to the Republican translation of the bible this is O.K. Nothing to see here folks, move on.

Where is Ron Richard - - on Call for Greiten's Removal

they are all jeebus whisperers and buybull scholarss said...

David Humphreys is calling for Greitens to resign after donating $2 million. His lone supporters in SWMO appear to be Bill White and Harvey Hutchison

Mr. Richard is too busy with having to pay up on all of the IOUs that he owes before his term ends to take a leadership role with something as trivial as this. Politics at it's worst.

This just further reinforces the fact that this state sucks!