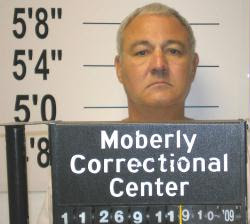 Less than 17 months after McDonald County Circuit Court John LePage restored his driving privileges saying he no longer posed a threat to the "public safety of this state" the drunk driver responsible for two deaths on July 30, 2004 was arrested by the Highway Patrol for driving while intoxicated.

He was cited for DWI and speeding.

Meerwald spent time in prison after pleading guilty to two counts of involuntary manslaughter in connection with the deaths of Jessica Mann, 7, Joplin, and her grandfather Jim Dodson, 69, Neosho.

According to investigating officers, Meerwald, intoxicated and driving at a high rate of speed, ran his car off Highway 86 near Neosho and killed the two, who were standing in Mr. Dodson's driveway.

The deaths of Jessica Mann and Jim Dodson led to a new law in the state of Missouri, sponsored by Sen. Gary Nodler, R-Joplin, which allows prosecutors to charge drunk drivers whose actions lead to someone's death with second degree murder.

The law did not apply to Meerwald, who was charged with two felony counts of involuntary manslaughter and after three changes of venue, first to Jasper County, then to McDonald County, and finally back to Newton County, he pleaded guilty and was sentenced to seven years on each count to be served consecutively.

Meerwald spent far less than 14 years in prison, though online records do not indicate when he was released.

After his release, Meerwald petitioned to have his driving privileges restored. Judge John LePage signed the order on January 24, 2017. 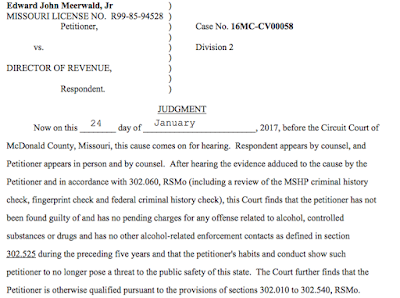 Absolutely sad. How could this judge just give him his driving privileges back so easily? He should have to earn them or never get them back. He should be required to go to AA or something. Is he in jail now? He has to be violating his parole?

This just saddens me to read this but at the same time it angers me that this was able to happen.

Unreal our judges are really not doing what is in the best interest of our communities.

im sure he was probably on parole after was released an he most likely had to attend AA and as state law reads he would have had to have a breathlizer i his vehicle to recieve his licsence back even after havin his driving previalges re enstated by the judge. He would have had to have taken the test and thats written an driving - again and the breathlizer would of had to be already installed for him to take said test. This sucks that after such a horrific accident that he didnt learn anything at all. ����

This person is responsible for killing my father-in-law and my niece. He didn't have to serve even half of his sentence, even though I and the rest of our family attended every trial and communicated what our family was put through, and what we felt was not enough punishment.
When we found out that he was trying to get driving privileges, we even wrote letters to John LePage asking him to not grant that privilege, and expressed that Meerwald gave up ALL his rights when he made the decision to get in his car after drinking heavily that fateful morning and then killing TWO of my family members when they were in the YARD!!

I agree his sentence was to light and he learned nothing. Unfortunately, it is a system failure, not The judge’s failure to society. Judges have to apply and adhere to the law. They don’t make the law, the legislature does. If you don’t agree with the law, speak to a member of Congress about supporting changing it and making it tougher. In some states, vehicular homicide/manslaughter results in a mandatory 20 year sentence if the driver is proven intoxicated. Additionally, some states require a mandatory minimum of serving at least 85% of the imposed sentence.The negative side of this is overcrowded prisons costing increasing tax dollars which raises taxes on society. Society pays the price one way or another for criminal actions.

Christina, what you say is nonsense. Judges have a wide degree of latitude in deciding such matters. The problem is that judges also drink and sometimes drive after having done so, and they grant leniency when they shouldn't. Drunk drivers who kill people should lose their driving privileges permanently, and if they drive again thereafter, they should get a 20-year sentence with no early release. That would prove to be a deterrent to others who might think twice about driving drunk.

We ,the family, did get Jessica's law passed!
It probably doesn't matter to anyone else who has not had family members KILLED by the hands of someone who chose to drink and drive.
It will have been 14 years next month, and if he had to serve the full sentence he had been given, would still be in prison.

I'm not in any way defending this guy or the judge.

It seems like our tax dollars would be better spent investing in sincere rehabilitation of criminals. It wouldn't work for all of them, but the ones that were successful would be much more beneficial to society. Much better than just letting them out only to return down the road, after doing more damage.

My heart goes out to you! There is no justice in this. 7 years for willfully taking lives is not enough. I've seen 4 reports here on drunk drivers so far; zero comments on two, and a multitude of comments in support & defense of the other murderer.
NOBODY cares in this society...all just look the other way and allow this to happen. Over and over, and over again. Nothing will change till each individual takes responsibility for stopping it. We are all guilty of murder here. Who here hasn't pretended not to know someone got behind the wheel, even after 1 drink?
They are silent then, but now they want to give armchair commentary. I challenge everyone to do better than that tomorrow.
And I keep you deeply in my prayers. The horror of what you and your family have gone through is unspeakable.