Why I want the Joplin Globe to succeed, plus top Turner Report/Inside Joplin posts for the week 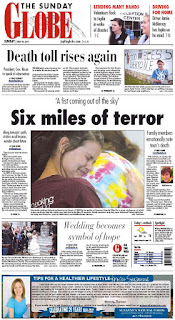 When I wrote my farewell to Joplin Globe Publisher Michael Beatty earlier this week, some of my commenters took the opportunity to attack me because I have a deep-seated grudge against the Globe or because the Globe doesn't pay any attention to this little blog.

First of all, I am not going to be modest. The Globe pays attention to what I am writing about. I am not so full of myself that I believe they are obsessed with my blog or that it is important to them, but the people at the Globe do pay attention to the Turner Report.

And I pay attention to the Globe.

For decades, I read the Globe in the morning and as I have noted before, when I was in high school, I paid Alan Oxendine 15 cents every afternoon for a copy of the Joplin News-Herald.

For a long time, I could count on spending a considerable amount of time each Sunday morning with the Globe.

That, sadly, is no longer the case.

While I still read and enjoy Wally Kennedy's page two column and can find some interesting AP stories, there is little to admire about the rest of the publication.

I open the newspaper every Sunday, every day for that matter, hoping that it will offer me a window of what is going on in the Joplin area. At times, it does, but those times have become fewer and fewer as the years have passed.

I have loved newspapers for as long as I remember and I want the Joplin Globe to a be a giant that serves the community, offers in-depth coverage no matter who may be offended and throws the cookie-cutter feature stories, columnists who believe their families should be the center of attention and the Rush Limbaugh/Fox News pretensions of Geoff Caldwell.

As I want the Globe to succeed, so would I like to see newspapers like the Carthage Press and the Neosho Daily News returned to ownership that actually cared about newspapers.

While the dearth of quality local journalism has opened the door for a one-man operation like the Turner Report/Inside Joplin to carve out a niche, I would still give anything to have the Joplin Globe, the Neosho Daily News and the Carthage Press return to being newspapers and not media products.

As some commenters, including those who spoke up for me, pointed out, the Turner Report is not a newspaper.

In this current media climate, I would love to see a quality weekly created to tackle this market, but it probably cannot be done any more. With the consolidation of newspapers, there is almost no place to get one printed.

I would love to have the opportunity to take on that kind of project in a digital format, with a handful of reporters, columnists who know the community and know how to write about it and a dedication to news as a public service and to the concept of journalists serving in a watchdog capacity.

That is unlikely to happen, but I can provide a news operation that offers news, commentary and investigative reporting and an outlet for people who want to comment on the matters that affect them. Add free obituaries, a considerable amount of records material, bulletin board items and coverage of crime and courts and the Turner Report/Inside Joplin offers just what I have promised- an alternative news source for the Joplin area.

Glance through the items in this week's Top 10 most visited posts on the Turner Report, Inside Joplin and Inside Joplin Obituaries and you will see some items that have not been available from any other source, some highly readable posts and a news service that keeps on delivering, day after day, week after week, month after month, and year after year.

Thanks to those of you who have contributed to this news operation, through word of mouth, sharing posts, making comments, providing news tips and documents, paying for subscriptions or making contributions.

The Top 10 lists with links to each of the posts can be found below the PayPal buttons. If you have yet to make a contribution this year or take out a subscription, please consider doing so, either by using the buttons or by sending your contribution to Randy Turner, 2306 E. 8th, Apt. G, Joplin MO 64804.

Help the Turner Report/Inside Joplin continue to provide a much-needed alternative news source for the Joplin area. If you feel this independent news operation benefits you and this area, please consider taking a subscription or making a contribution of any amount by using the PayPal buttons below or by mailing a contribution to Randy Turner, 2306 E. 8th, Apt. G, Joplin, MO 64801

4. Alba man charged with assault after allegedly beating girlfriend on I-49

6. Hawley: McCaskill wants illegals in U. S. no questions asked, allow them to use children as human shields

7. Wagner: America is safer today thanks to Trump's meeting with Kim Jong-un

9. Hartzler: I am glad Trump addressed issue of children being separated from their parents; Obama did it, too

10. Jason Smith: Because of Trump tax cuts, people everywhere are optimistic about their future

2. Carthage teen airlifted to Mercy Springfield after being run over by a dump truck

One week from today- Saturday, June 30, I will join three other area authors for a signing from 9 a.m. to 1 p.m. at the Neosho Public Library. It will be the first signing for my new book Newton County Memories, which will be available along with Silver Lining in a Funnel Cloud, along with my other books and Turner Report t-shirts. If you can't make it, you can order the books at Amazon.com.

You mentioned Wally and he is one bright spot at the Globe. You did fail to mention the great work in the past of Andy Ostmeyer and Susan Redden who did great work under Simpson in the old days. I am sure there were other more very hard working news people there, but alas the paper has gone down the tubes and is a sad excuse of what it was. Is it because of the present management or is it just that past management was very, very good and it is a sign of the times?
We only have many recollections of what was and what is now the norm and it is with so many things of us older people. Car parts that were reliable, cars we could work on, homes built by honest builders and on and on.

Debby Woodin does an excellent job in covering City Hall and the community, Claire Godwin, Bless his heat is a wonderful golf writer
The editorial is bigoted and biased left; fortunately the community is staunch conservative and will never let that ilk take over SW MO.

Priorities on sports, etc are too bad

Paper is yesterday
Digital is the future; so Randy you should be in good shape min my home town of New Orleans the major daily cut down to 3 times per week years ago.
BTW, I disagree vehemently if lettingba bunch of snowflakes blog anonymously. The Glibe gets that part right

Anonymous 4:39, you are absolutely right about the work done by Susan Redden and Andy Ostmeyer. Though I failed to mention her name in my earlier post, I noted the great reporting she did on the Rita Hunter scandal. Andy had one big story after another back in the 90s and through the 2000s and offers detailed reporting that helps readers understand what is going on, a lost art. Harvey, I will never understand how you and some others can characterize the Globe's editorial page as leaning left. While there have been a couple of notable exceptions, including the 2008 Obama endorsement, for the most part the club has stuck strictly to a pro-business, por-Chamber of Commerce line that used to be the Republican line. If anything, you are faulting the Globe for being right-wing and not far right-wing.

Interesting how you completely trashed Beatty in that previous post but then you complain because you say people "attack" you when giving their opinion about you. Total hypocrisy as usual. I think that speaks a lot more to your character or lack thereof than those who work at the globe.

There is no hypocrisy in it. People have every right to criticize me or attack me (verbally, at least). What is hypocritical about acknowledging the criticism? I think that speaks a lot more to your comprehension than it does to my character.

I think your comprehension is in question. Let's dumb it down for you a little bit. I was simply pointing out the obvious, that you constantly cry about people criticizing you when it's exactly what you do to everyone else. That's the hypocrisy. Sorry, don't know if I can simplify that any further for you.

Expect Globe to endorse McCaskill, who has definitely outlived her usefulness in Missouri and US

You don't want the Joplin Globe to succeed. What you want to do is whine about how the Joplin Globe obviously doesn't want anything to do with you. They think you are a lying idiot as well.

So could you whine about why the Joplin Globe won't sell just electronic access to readers for $10 or less per month so that if or when the Joplin Globe does pay attention to you that they will decide to actually have someone buy their paper electronically as opposed to me having to set up an anonymous proxy browser? They despise you for good reason and so if you are for something maybe they will be against it and they will sell me an electronic subscription for $10 per month or less?

Please go out and do something useful for once.