Cynthia Davis on Sarah Sanders incident and Maxine Waters: The hate from the left is real 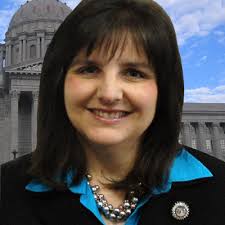 (The author of this op-ed column, former Rep. Cynthia Davis, R-O'Fallon, is the host of an internet talk show.)

Perhaps they need to change the name from "Red Hen" to "Blue Hen" if they're so fearful of people who hold different political beliefs. By now you've probably heard about the owner of the Red Hen asking Sarah Sanders to leave because Sarah works for the President of the United States.

Most of you know that Barack Obama and I don't share many political values. However, if he came into my Back to Basics Christian Bookstore, I would be honored. If he brought his family, picked up some books and made a purchase, I would be thrilled! As a retailer, we like it when people support our store. One of my fellow retailers told me as long as their money is green, that's the only color that matters.

Sarah Sanders was right to leave the restaurant and even offered to pay for the food they had already been served. Reports were that the restaurant owner was polite, but is it possible to be polite while being rude? Now that a few days have passed and the owner has had time to reflect on her actions, she says she would do it again!

The hate from the left is real. Sarah needed to leave for her safety. If the wait staff and owner were that hostile, should Sarah be concerned they might contaminate her food by spitting on it or doing something that could make her sick? We may never know how far down people will go once they begin the descent.

Now a prominent Democrat, Maxine Waters, is calling for more uncivil behavior by asking people to push back and harass Trump's staff by saying this: "If you see anybody from that cabinet in a restaurant, in a department store, at a gasoline station, you get out and you create a crowd and you push back on them, and you tell them they’re not welcome anymore, anywhere,”

I'm happy Sarah is giving this Country many lessons on how to be brave in the face of adversity. Her courage and class in the face of so many mean-spirited hateful people serves as a model of decency and shows us how to respond correctly. It seems like the left is trying to divide and stir up as much dissension as possible. Why can't we all just get along?
Posted by Randy at 8:23 AM

I cannot believe what you said without mentioning our President and the treatment he has given others who did nothing to warrant his insults, lies and lack of empathy for those expressing a view. How blind you and your party has become to a deceitful and mean spirited agenda you are trying to lay onto a few individuals. I am so sorry for the future and the divide they are going to face if this party of scared little people continue.
Anytime George Will comes out against your party and calls you "invertebrates" it shows that something is wrong. In case you do not know what that term is I suggest you look it up in dictionary, biology books or the internet.

Democrats:You have to bake a cake for our gay wedding or we will bankrupt you!

Also Democrats:We can refuse service to anyone who doesn't share our beliefs.

Pick one. When do I get my separate drinking fountain?

The hypocrisy of the right is unbelievable. Their orange skinned despot is using hate daily and this fool wants to cry about the hate from the left? They don't like their own playbook being used against them. They were nothing but obstructionists for 8 years and now they cry the Dems are obstructionists, yet the repugnicans have control. And don't go getting all sciencey on them with your talk of invertebrates, because the only science they believe in is the science of making their rich owners more money.

Hurry durr the president is orange. You resisters are so boring.
What is hateful about expecting immigrants to follow the law? There are 9 places scattered throughout Mexico where migrants can go to request asylum. The simple fact is that they come to the border expecting catch and release so they can then disappear inside the country.
I understand why they want to come here, I would too if I were them, but I'm supposed to follow the law and I do, why shouldn't they?
DACA was unconstitutional, get over it. The "constutional scholar" who made it up and signed it into law knew that, and he admitted it. The next president was within his rights to do away with it, because only congress can make and pass laws.
To quote the aforementioned constitutional scholar: Elections have consequences.
The law does not, and should not care about your feelings.
How is it hateful to point out facts?

Cynthia Davis is spot on, and absolutely correct!
I noticed three responses as anonymous. They are all of no relevance because the authors are too cowardly to even identify themselves.

I can slightly see 2:11 viewpoint. But not baking a cake because of a persons life style is quite different than a person who knowingly spreads and repeats lies about so many different subjects and even goes out of her way to explain that it is OK. She has refused to accept criticism from reporters about the President when she knowingly sees the total stupidity of his actions. Her Dad was touted to be a righteous man, but for some reason even he has taken the party banner and is running with it. So much for our religious leaders practice of the good book and application of its principles. Now the high court has stepped back into the 1940's and the 1800's to use unjust observations of humanity. It is a railroad running at full speed coming into the station and the blind followers will suffer the aftermath of a society based on late 1800's and early 1900's labor situation.

When did anyone one the right call for harassing a person because of their views? We aren't talking about political tactics, we are talking about harassing individuals for their viewpoint. That is nothing short of strongarm fascism. Bully tactics taking to a level that will end up with another political motivated shooting.

For those who are deflecting to Trump to try to excuse the behavior of the restaurant owner, let me point out that the only reason we got someone as rude and obnoxious in office is because of the hate thrown at conservatives for the eight long years of Obama. I deplore the personal attacks Trump hurls at people who insult him, but he got elected because he was the only one who would give back as much and more of the crap that has been hurled at all conservatives constantly under Obama. Sara showed grace and class, and what is not even mentioned in this article is the fact that while she and her husband went home, the remainder of her party went across the street to another restaurant and the owner of the Red Hen organized a mob to chase and harass them. We, conservatives, hated obamas policies. We never, not one single time, organized a mob to chase down, harass, physically assault, or terrorized members of his staff or his supporters. So to Anonymous, afraid to use their name, you are flat out lying and trying to deflect from your own actions.

It was just a few years ago that lunch counter owners in the South were told they had to serve African Americans; Sarah’s civil rights were violated.
And regarding the cake purveyor, he said anyone ( including LGBTQ) could come into his store and buy every item in it. The difference was I. The custom decorating and being part of a a sham ceremony which he had problems with on religious grounds.
( Hope liberals underthat; but don’t expect them to. Their knowledge comes from Maxine Waters)
Harvey HUTCHINSON 303-522-6622 voice&text

WOMP! WOMP! For 8 years your orange skinned jackass claimed Obama's birth certificate was fake. For 8 years your "conservatives" played obstructionist and hurled their brand of hate. A republican spewing about the constitution and what in your opinion is unconstitutional is the most sincere form of hypocrisy. Your president doesn't have a clue as to what is in the constitution let alone abide by it. Many in his swamp cabinet are being investigated for some egregious unethical acts simply because no one in his cabinet knows anything about ethics or morals. We now see how inept and ignorant Trump and his cabinet are. Keep crying about your being mistreated. I heard many of your bible thumping good ol' boys crying because they couldn't stomach a (insert "N" word here) in the White House. Cry about your poor mistreatment. So to "Unknown", afraid to use your name, practice what you preach and you are flat out lying about your "party before country" good ol' boys never harassing anyone from the other party or anyone with actual independent thought and facts. The orange skinned fool in the outhouse started with all of his name calling and hate which is a political tactic to rile up his "base".