Efforts to identify pedestrian killed in accident at 20th and Range Line top posts for this week, plus a special message for Turner Report/Inside Joplin readers 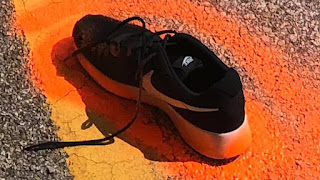 A picture of a shoe.

It was unusual to see that kind of photo issued with a Joplin Police Department news release, but it was a shoe that told a story.

At the time the news release was issued, it was a long shot effort to identify the pedestrian who had been critically injured in an accident at 20th and Range Line.

Hours after the photo was published on Facebook, on Inside Joplin, and was shared throughout the area, the photo symbolized something else- it became something that had been worn by a young man who died at a Joplin hospital.

It was something that belonged to Matt Collins, 16.

The desperate search for the young man's identity was the most-visited post this week in Inside Joplin, with updates on the story finishing second and fourth in the top 10.

A story that grabbed readers' attention last week- the road rage murder of a Carthage man- topped the Turner Report list and also was the third most visited post.

4. Court records: Joplin teen charged with drive-by shooting accused of pointing a gun at another man in October

5. Arraignment scheduled for Carthage man accused of stalking woman, trespassing, threatening to beat in her skull

7. Cynthia Davis on Sarah Sanders incident and Maxine Waters: The hate from the left is real

10. Three years ago this month, Silver Lining in a Funnel Cloud published

2. Unidentified pedestrian in accident at 20th and Range Line dies at local hospital, deceased estimated to be 16 to 20 years old

4. Joplin teen identified as pedestrian killed in accident at 20th and Range Line

***
It has not been a good month for the Turner Report/Inside Joplin as far as revenue is concerned. Subscriptions and contributions have dropped dramatically the last several weeks, coupled with the unfortunate need for emergency repairs on the computer that is being used to type this post.

The Turner Report, Inside Joplin and Inside Joplin Obituaries average more than 23,000 readers a day. Many of you have subscribed or contributed in the past and if you have done so in the past year, this message is not directed at you. You have helped provide an alternative source of news and commentary for this area, one that has stepped up when others haven't on many occasions and will do again.

That being said, I am sure many of you have thought about making a contribution but have not done so.