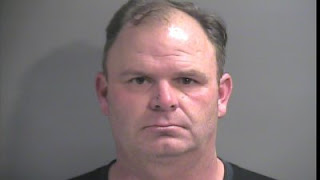 John Stan Harmon, Pineville, (pictured) pleaded guilty in federal court Friday to a charge of stealing trade secrets and will be sentenced at a later date.

Harmon's crime was detailed in a plea agreement filed in U. S. District Court for the Western District of Arkansas.

On or about November 0f 2016, WalMart Stores, Inc. contacted law enforcement to report a theft of proprietary production and sales data by a former employee, the defendant, John Stan Harmon, just prior to terminating his employment.

Specifically, per a Walmart representative, John Stan Harmon worked at Walmart Stores, Inc. as a buyer, assigned to the furniture department. As a buyer, Harmon had access to a computer program maintained and secured by Walmart that contains, among other things, production and pricing information of products offered for sale by Walmart and its subsidiaries. The information contained in said program is highly sensitive information, of which employees must complete ethics training that details the restricted nature of such in order to access the program.

Specifically, the information contained in the program, includes the production price that Walmart pays a particular vendor/manufacturer for a particular item and the profit margin of each item ultimately sold by Walmart.

Per the Walmart representative, Walmart has not suffered an identifiable financial loss in this case, but the information taken by Harmon is highly valuable to both vendors and competitors.

A subsequent law enforcement investigation revealed that in October of 2016, Harmon provided notice that he was resigning from his position. Thereafter, on or about October 17, 2016, Harmon accessed the Walmart computer based system to obtain pricing and productions information on thousands of items offered for sale by Walmart.


Of importance, much of the information that was generated by Harmon using the protected program related to outdoor products. Thereafter, Harmon emailed said information to his private email account.

After leaving Walmart employment, Harmon subsequently went to work for Outdoor Leisure Products, which is both a vendor to Walmart and a distributor of products online.

A search warrant return for Harmon's private email account showed that he, subsequent to leaving Walmart employment, provided the list of Walmart production and sales data which he obtained from the Walmart computer system to certain executives of Outdoor Leisure Products, via email.

Harmon was subsequently interviewed by law enforcement and acknowledged that it was protected proprietary data, that he should not have ex-filtrated such and admitted that he provided the protected information to his new employer, Outdoor Leisure Products.

Richard Davidson, the oh so ethical ex-mayor of Neosho looks like he may not be so ethical after all

The NWArkansas news stations included one additional line that I didn't see in this report.

"[Wal-Mart spokesman] Hargrove stressed that Harmon’s actions were his alone and not reflective of Outdoor Leisure Products."

That would indicate Wal-Mart wasn't accusing anyone other than Mr. Harmon of wrongdoing.