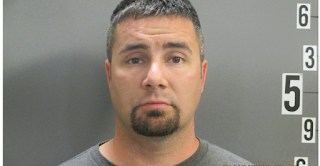 A Carthage man is being held in the Jasper County Jail on a $50,000 cash-only bond after being arrested on two counts of statutory sodomy Tuesday.

According to the probable cause statement, on one of the counts Adams allegedly walked in on an underage girl showering, made her bend over, shaved part of her body, then would not allow her to put her clothes on after she got out of the shower. all of the while using his cell phone to record a video.

After obtaining the images, the probable cause statement said, "he went to his bedroom and locked the door."