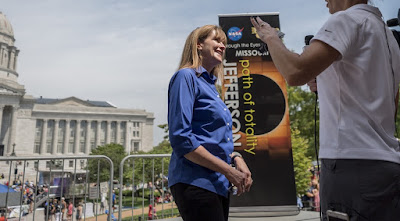 Space News reports NASA Administrator Jim Bridenstine is lobbying the Trump Administration to appoint Kavandi deputy administrator. If Kavandi is appointed, she would have to be approved by the Senate:

Bridenstine offered his endorsement of Kavandi after being asked about the status of the deputy administrator position, which has been vacant since the beginning of the Trump administration last January. He said the position is critical given the number of major development activities, including commercial crew, the Space Launch System and Orion, in progress.

(The accompanying photo is from NASA. My recollections of how the Carthage Press covered Janet Kavandi's first space shuttle flight, which happened 20 years ago June 2 can be found at this link.)
Posted by Randy at 7:19 PM

Wishing and hoping; and Praying!!