Hawley: McCaskill wants illegals in U.S., no questions asked, allow them to use children as human shields

Attorney General Josh Hawley used the immigration situation involving parents being separated from their children as an opportunity to attack his opponent in the U. S. Senate race Claire McCaskill in a series of tweets. In only one of them, the last one, does he mention the Trump policy that has created such an uproar. 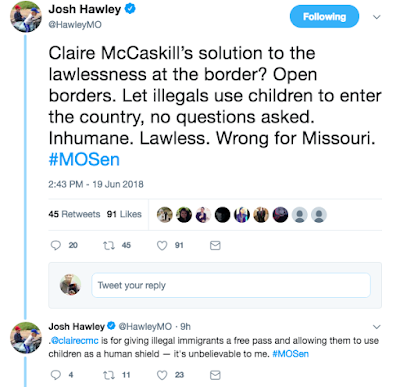 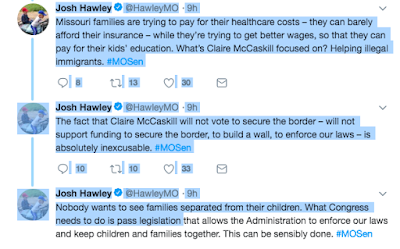 Would this article be considered unbiased news reporting, biased new reporting or an editorial???

"Nobody wants to see families separated from their children." Really, Josh? Then demand that the 2,000+ kids currently held in detention or moved to various states under the direction of HHS be reunited with their parents immediately, which will not be happening as things stand. According to the White House, these kids will not be "grandfathered" into the new no-separation policy. A good start in showing that you mean what you say would be to demand that the Trump administration close the baby jails and get those infants, toddlers, and very young children back to their parents and end the suffering. When they cry, and we've heard them cry, the staff isn't allowed to even touch them to comfort them. Did you know that, Josh? If not, why not? If so, what are you doing about it?

Another Missouri republican running with Trump's lies. It didn't work to well for "Witch Hunt" Greitens.

Josh,Josh,Josh -
You really need a better mentor than Trump. He's a monstrous egomaniac who doesn't know how to tell the truth. It's embarrassing to watch him offend our allies and pacify despots worldwide. Sad bunch of legislators, too; fear of his venomous attacks is reshaping the GOP. Pitiful state we're in right now.

Calling anyone else a liar is hypocrisy at its worst. Traitor Trump is lying if his mouth is moving and is the biggest crook Russia has ever elected. You blindly follow Trump and can't figure out how to use spell check or at least re-read your own tripe for spelling and grammatical errors. Right Harvey?

What evidence do you have that PresyTump is a trait?
Which country is he traitor to?

I think you’re the pop off liar, anonymous, plus no guts to even admit who you are?

What has Trump lied about?

Videos of your lying orange buffoon at any of his rallies. Videos of his denials then confessions to what he was previously denying. That is hard fact Harvey. His traitorous behavior is under a continuing investigation that should wrap up soon. More of his cronies are flipping to save their own hide. Try again Harvey. At least your opinion means something to you. And again, if you are going to continue to post here, have the decency to proof read your posts. I quote "What evidence do you have that PresyTump is a trait?" First off, PresyTump? Wow! Does he call you HarveyWarvey? Second: trait? Oh, and I think you're the pop off liar! Nanny nanny boo boo!