Jason Smith; Because of Trump, tax cuts people everywhere are optimistic about their future 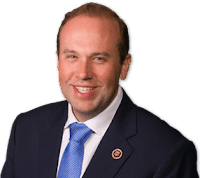 Jobs are open, wages are up, unemployment is down, and Americans are optimistic about the future. The country has come a long way in the six months since President Trump signed historic tax cuts, which I was proud to send to his desk. The best is yet to come, but the Tax Cuts and Jobs Act is doing wonders for the pocketbooks and paychecks in Southern Missouri. That’s because the new tax code prioritizes farmers, families, and workers first – removing the Washington roadblocks that have held them back from success for too long.

The status-quo tax code was punishing for the working families of Missouri and led to grim economic conditions. Stagnant wages, minimal growth, and a lack of jobs made it increasingly harder to make it in America. Hard working Southern Missouri farmers and families had to spend hundreds of hours a year just trying to figure out how much money to send to Washington. They weren’t alone, 90 percent of taxpayers nationwide had to pay someone or use computer software to figure out their taxes for them under the old, unnecessarily complicated tax code.

The new tax code has completely flipped the priority from Washington-first to families and workers first. A family of four making up to $55k doesn’t owe any federal income taxes and can keep their hard-earned money instead of sending it to Washington. The expanded child tax credit Ivanka Trump and I helped write into the law makes it easier to support a family. And the Trump Administration will soon be rolling out new postcard-style 1040 forms so you can spend more time on the farm, with your family, or doing anything else other than figuring out your taxes.

Now that American businesses and workers can compete on the world stage, the results are going to keep coming in. Workers everywhere received pay raises in February when the IRS began withholding less money out of their paychecks because of the new tax law, and some businesses are taking it a step further. In Missouri we’ve seen businesses like Tyson Foods in Dexter reward employees with $1,000 bonuses, or U.S. Bancorp with operations in Willow Springs announcing that 60,000 employees will receive bonuses and wage hikes. Across the country four million Americans have now received bonuses or wage hikes.

The long-term economic security and stability will allow businesses everywhere to invest in their employees and in our communities. Even President Obama publicly acknowledged the tax rates had to come down so America could compete, and with Donald Trump in the White House we finally have a President who is willing to do something about it. Two out of three jobs in this country come directly from a small business. Now that they have room to breathe, a million jobs have been created and there’s now more jobs open than people looking for them.

As a result of all this, the economy is moving again and people everywhere are optimistic about their futures. I don’t come from a wealthy family, so it means a great deal to me that the lowest-income households are increasingly more confident about their future and their chance to make it in America. This week it was reported food stamp enrollment fell to an eight-year low because people are finding quality jobs and a booming economy is lifting people out of poverty.

The new tax code is a historic win for Missouri and the country, but the work isn’t over. The Senate’s arcane filibuster rules narrowed the tax bill last year, so there’s work to be done to fine tune the law to benefit Missouri’s middle-class. When Ivanka and I worked on the tax bill we successfully included an expanded child tax credit for families, but it couldn’t be permanent because of Senate procedure and obstruction. I’ve authored the Permanent Tax Relief for Working Families Act to make this credit permanent. While the House of Representatives voted to fully repeal the awful death tax, liberal Senators have stopped the Senate from doing the same. I’m working with President Trump to repeal the estate tax that hits family farmers hard, because death should not be a taxable event. I want to know how the new tax code is working for you. Drop me a note at JasonSmith.House.Gov and let me know your take on the tax cuts, six months after President Trump signed them into law.

Newton County, Missouri the way it used to be. My new book Newton County Memories features stories about the people and places that I knew and the events that occurred in the 1960s through 1980s. The book is available in paperback and e-book formats at the Amazon links below or you can order a signed copy by sending $17 (postage included) to Randy Turner, 2306 E. 8th, Apt. G, Joplin MO 64801

The media is jealous, can’t stand to see someone make Obama look awful, and hate him in general-/ even cheering when Peter Fonda, et al Advocate kid napping his wife, son and call his daughter outrageous names.

Yeah, get back to me when inflation is gobbling retirement savings and jobs are being lost due to increased tariffs.

Wow, just WOW! Now I can see how these Trump dumpsters operate. The more their fool leader lies and is made to look like the idiot he is, the more lies they spew to cover his treasonous backside. Even the Repugnicans are starting to look for cover as der Trumpenfuhrer cozies up closer to Putin and Un. Wait until the lying traitor is lambasted by Michael Cohen's testimony. He will look good in prison orange. It will go with his face.
M orons
A re
G overning
A merica

Uh, Jason, you might want to tell your little cheerleader Harvey that the tariffs will destroy any tax cut the average wage earner will garner and you might want to tell cheerleader Harvey that the moron's tariffs are already hurting his fellow Missourians by taking their jobs. What a tax break that is! Now they don't have to pay any because they have no income. More winning than we can stand! Russia is so happy they helped elect this moron.

Billy Bob Ray and i Wanna Be a Real Rocket Man said...

I hope to join Hervey on the Presdient's new Space Force.

I suppose that during training the cadets be at the new Space Training Center.

I bet Hervey is better qualifed to be the Space Cadet in Charge!

But if not Hervey then me?

Because of Trump's war on trade Harley Workers are losing jobs!

When you criticize Jason and Trump and myself,
Why don’t you have the basic courage to identify yourself?

I dare you to answer

Pick any or all to answer, email your survey answers to anonymous@Turner Report for tabulation. Be sure to include your real name and phone number- no hiding under a pen name or anonymous!

What should Harvey try so he'd be less irrritable and annoying in the comments?

A. Try eating raisins or prunes.

B. Take a nap before commenting.

D. Quit hating that everyone can't spell Tangipahoa Parish correctly, and that even fewer care how it's spelled.

Harv, the "you are anonymous so your voice doesn't count"-thing is getting old.
If that is the case then votes in elections shouldn't count because they are done anonymously.

Poor Harvey, you just don't understand that in this day and age of the dictatorship anyone that defends honesty, integrity, morals and ethics are enemies of your orange Russian despots camp. If they put their name on their anti-Trump post they are immediate targets for your right wing hypocrites. No one wants to lose their job for expressing their opinion over some garbage that you call president. At least for now, it is a free country and freedom of speech is a right. If your feckless leader has his way, there will only be free speech if you kiss his backside. That means you would have free speech forever. Scary thought. Now you have been answered. Go back to playing with something shiny and listening to your conspiracy BS from Faux News.

I know literally no one who has changed any spending habits as a result of the tax cuts. I can't even tell I got one.