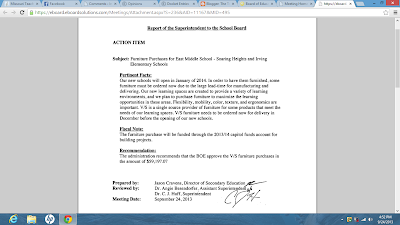 When Joplin R-8 administrators, seeking to furnish new buildings, allowed furniture companies to foot the bill for trips to their headquarters last year, it seemed to be a breach of ethics, to say the least.

As the Joplin Globe related in its Oct. 27, 2012, edition, the German manufacturer, VS Verenigt Spezialmobelfabriken, paid for Assistant Superintendent Angie Besendorfer and Director of Instruction Jason Cravens to come to Germany for two days at the beginning of October. The two took their spouses, according to the Globe article (the spouses paid their own way) and took a couple of vacation days sightseeing in Germany.

Plus, as Besendorfer noted, they had a chance to play with the furniture and jump on it, like schoolchildren might.

All of the school officials interviewed by the Globe said there was nothing wrong with allowing the company to pay for the administrators' trip and for whatever else was paid for while they were in Germany.

And after all, as Besendorfer said, they had a bigger showroom in Germany than they did in Charlotte.

Board member Randy Steele, who was board president at the time, said the trips made no difference because "the bid comes to us, so we, as the board, make that decision, not the person who went on the trip."

And tonight, in just a few minutes, the board will be asked to accept that lowest bid- the only bid that was solicited- from the company that paid for the Germany vacation.

A document signed by Huff and the two administrators who went on the trip to Germany is included in the Board of Education documentation for this evening and accompanies this post.

The board is asked to give V/S a contract for $59,107.07 to provide the furniture for East Middle School and Soaring Heights and Irving elementary schools.

The reason V/S is the only bidder- "V/S is a single source provider of furniture for some products that meet the needs of our learning spaces."

As Besendorfer told the Globe, "I'm confident we have done nothing inappropriate."

(Click on the screenshot to make it bigger.)
Posted by Randy at 7:35 PM

It's a shame that she has to run away before she can see if the kiddies really do learn any better when sitting in German furniture as opposed to furniture made by Americans.