Nixon: We must strengthen and reform Medicaid the Missouri way 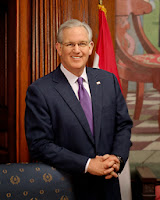 Gov. Jay Nixon today addressed the media in Jefferson City on the importance of strengthening and reforming Medicaid the Missouri way. Below are his prepared remarks:

"Tomorrow, we will celebrate a New Year. And as we do every January 1, we'll reflect on what we've done over the past 12 months, and contemplate what we resolve to accomplish in the year ahead.

"But 2014 will be a little different. Tomorrow, 4.4 million Americans in states all across the nation - folks who are working, but don't have health insurance - will wake up and be eligible to get the basic health care services they need.


"Tomorrow, roughly $37 billion - including two billion of Missourians' tax dollars - will begin to flow to 25 states that are reforming and improving their health care systems. States like Arkansas and New Jersey, Iowa and New Mexico, Michigan and Ohio, Arizona and North Dakota.

"Tomorrow, businesses in these states will have a significant competitive advantage - because as more people get health coverage, fewer people show up in emergency rooms, putting downward pressure on private health premiums.

"Tomorrow, nearly 300,000 working Missourians will continue to be uninsured. They're factory workers and house cleaners, mechanics and truck drivers, moms and dads. These folks work tough, low-paying jobs that don't offer health benefits, and they can't afford a doctor's bill.

"Tomorrow, moms with breast cancer, dads with heart disease, young adults with mental illness, will go another day without the treatment they desperately need, for no other reason than they live in Branson instead of Bentonville, in Cape Girardeau instead of Cairo, Maryville instead of Muscatine.

"Tomorrow, Missouri families and businesses will continue to pay federal taxes, but instead of coming back to Missouri, those tax dollars will be spent in other states: $2 billion a year, $5 million every day.

"Tomorrow, employers in Missouri will face an uneven playing field - shouldering the burden of rising health premiums, while their competitors in other states see their costs go down.

"Tomorrow, Missouri's Medicaid system will operate as it has for years, without additional needed reforms, protections for taxpayers, or new measures to promote personal responsibility, many of which are being granted for the first time in states that are moving forward.

"Obviously, it doesn't have to be this way. We've seen our neighbors in Arkansas, Illinois, Iowa and Kentucky move forward with common sense, market-based approaches to helping low-income working families afford the basic health care services they need to live healthy lives.

"Republicans and Democrats in these states worked together to stand up for taxpayers, for families and for their communities. They seized this opportunity to implement innovative reforms - like rewards for making healthier lifestyle choices and penalties for missing doctors' appointments, or showing up at the emergency room with a stuffy nose.

"They're using market-forces to modernize what had been outdated and inefficient health care systems, and improve outcomes and reduce costs for everyone. And unless we change course, they're going to do all this with our tax dollars - while Missouri gets left behind.

"That's wrong - and as we've seen in these other states, there's a clear way to fix it.

"So as we begin the New Year, let's resolve to work together to make Missouri a healthier place to live and work.

"Let's resolve that Missourians who work hard day and night can afford to see a doctor when they are sick and to take medicine to help them get well.

"Let's resolve that no Missourian should have to choose between going back to work and keeping their health insurance.

"Let's resolve that Missourians' tax dollars be spent here in Missouri, not in other states.

"And let's resolve to pass a bill that brings our tax dollars home to strengthen and reform Medicaid the Missouri way.

"The stakes are high. The choice is clear. And time is running short. We can - we will - we must get this done this year."
Posted by Randy at 2:52 PM

Missouri deserves what it gets. Hell, the voters sent those idiots to Jefferson City knowing they were noting more than rabid partisan party hacks.