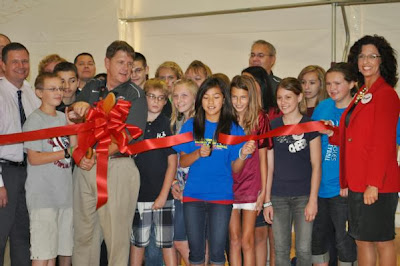 For the past two and a half years, students and staff at East Middle School have made the best of education in a glorified warehouse, often arriving at the building only to be greeted by the aroma from the neighboring dog food factory.

Their concerts, plays, and athletic contests are held at other buildings and for their assemblies they meet in the commons area and sit on the floor.

In less than seven weeks, the warehouse will no longer serve as a home away from home for East students, some of whom have been there since the day it first opened in August 2011. (Note: The accompanying FEMA photo was taken at ceremonies opening the warehouse East Middle School.)


They will move into a brand-new building, one that is specifically designed with 21st Century learning in mind- a building that never needed to have been built.

Though the May 22, 2011, Joplin Tornado destroyed the auditorium and gymnasium at the two-year-old East Middle School, the classroom section was left intact, suffering some roof damage and water damage when the sprinklers went off.

Even though less than three months remained before the beginning of school, representatives from Crossland Construction told Joplin R-8 officials East could be up and ready to go by August 15. The classroom section would be ready and even the gymnasium could be built by that time. They might have had to use a temporary building or two and ongoing construction would be a necessary nuisance, but the students and staff, many of whom had been traumatized by the tornado, would be at the same school, in familiar surroundings.

At a meeting of school personnel held just three days after the tornado, EMS Principal Bud Sexson said construction work would begin soon and they would be able to be back in the building by opening day.

And that is exactly what should have happened, according to a 400+ page investigation of the Joplin Tornado issued today by the federal National Institute of Standards and Technology (NIST).

Of the entire school complex, the south end, where the Gymnasium and Auditorium were located, was closest to the estimated center line of the tornado damage path (see Fig. 3–52), and was affected by an estimated maximum wind speed of 170 mph ± 20 mph (EF–4 range) from a northwesterly direction. Along the length of the complex, there was a sharp gradient in wind speed with the north end affected by much lower wind speeds compared to those that affected the south end. Consequently, and due to the fact that most building sections of the north end of the school had shorter span roofs, these sections (north of the Gymnasium and Auditorium) sustained only minor damage to their building envelopes, while the Auditorium and Gymnasium buildings sustained total structural collapse of their roof systems and partial collapse of their perimeter walls.


If the damage to the section of the campus that was needed in order for school to be held was "minor" as the NIST report indicates, then why have East Middle School students spent the past two and a half years in a warehouse on the far outskirts of the district?

Shortly after the tornado as dreams of finding silver linings from funnel clouds were dancing in R-8 administrators' eyes, the idea of having a 21st Century middle school to go along with the new high school/Franklin Tech and the new Irving was hard to resist and buying up additional land surrounding East and also building the second elementary school there was also something new and innovative that no one else was doing.

The only thing that stood in the way was FEMA. The following passage is taken from FEMA's report:

A cost/benefit analysis was conducted and determined that the facility was not salvageable. Repair of this structure would essentially mean reconstruction of a majority of the exterior, windows, heating and air units, duct work, lighting, wiring, electrical supply components, contents, wall coverings, flooring, parking areas and structural support components. The financial outlay and other construction concerns associated with repair of an aging structure to such an extent would be cost prohibitive. As a result, repair and restoration of the structure was not a viable option. As a result of the storm, an opportunity was made available by the Joplin School District to purchase additional property to the East of the existing East Middle School campus. This additional property was obtained because of the recent investment in the property for initial purchase and the general acceptability of its location. The purchase of these additional properties will allow East Middle School to be reconfigured at its existing site and allow for the construction of a new elementary school as well at that location. After analyzing the human and natural environment factors the school district chose to remain at this site because the District already owned the property, utilities were readily available at the site, combined with the fact that the land area of the campus was recently expanded, the Joplin School District intends on reusing this existing site for facility reconstruction.

The complete FEMA report, which includes much material that appears to be copied and pasted from material submitted to the agency by the R-8 School District, also includes a long recitation of all of the steps the district has taken to involve the public in its decision-making process.

An article in the August/September 2012 issue of Reason.com features comments from Superintendent C. J. Huff, explaining the problems the district had dealing with FEMA.

East Middle School is a less happy story than Joplin High. Having opened only in 2009,
the school was declared a “total loss” after the tornado. Because reconstruction has
involved the federal government, the project initially was delayed for months. “We’re
having to follow a different set of rules,” Huff says, “because federal dollars are
involved.”

One of the things that was at issue was a federal requirement, known as the "50 Percent Rule," that a building "is considered repairable when disaster damages do not exceed 50 percent of the cost of replacing a facility to its pre-disaster condition, and it is feasible to repair the facility so that it can perform the function for which it was being used as well as it did immediately prior to the disaster."

What was it that pushed a two-year-old building, that had been considered state-of-the-art, into being classified as "a total loss?"

Assistant Superintendent Angie Besendorfer revealed that information at a principals meeting in August 2011 at the administration building at 32nd and Duquesne.

It was all about the bricks, Besendorfer said. "We couldn't find any bricks that matched," she said. "They looked horrible."

One of many instances of fraud, I am sure. The public deserves to know all of the truth about what happened in Joplin after the tornado.