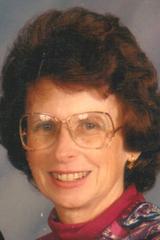 In the 36 years since I first entered the world of journalism,  I have met hard-nosed reporters who will stop at nothing, the kind of people who would throw their mother under a bus if it meant landing the big story.

When elected officials saw these reporters coming, they told their secretaries to put out the word they were going to be out of the office the rest of the day.

These were reporters who always landed their stories, but the most feared reporter I ever had the pleasure of meeting was nothing like these fearsome practitioners of investigative journalism.

When city and school officials wanted to keep something out of the public eye, they would have almost preferred to deal with one of the traditional take-no-prisoners reporters and not the sweet, grandmotherly representative of the working press who was a staple of Golden City journalism for decades.


It was not that Judy Probert was mean- you could take a microscope and a 20-year research grant and never find a mean bone in her body. Her interview subjects couldn't help telling her the truth. They did not want to disappoint her.

I first met Judy in 1978 when I was the sports editor of the Lamar Daily Democrat. She was a co-editor of the Lockwood Luminary-Golden City Herald at the time and I never had an opportunity to talk to her much. She would arrive at the Democrat office on Tuesday nights and paste together Thursday's edition of the Luminary-Herald, a process that would often last until well past midnight.

Late in the year, Judy retired and about six months after that, I became the last editor the Lockwood Luminary-Golden City Herald ever had. The newspaper went out of business in October 1979.

When I returned as managing editor of the Democrat in November 1982, Judy was contributing a weekly column, Golden Nuggets, and later wrote a weekly feature spotlighting area cooks and recipes. It was not a likely mixture for a hard-hitting reporter.

Judy would have been content to have remained in that role and she was excelling at it. Her features were well-read and her Golden Nuggets, a recap of what was going on in her beloved Golden City, were a fixture there.

The next phase of Judy Probert's reporting career came as a result of financial hardships that were facing the Democrat in the mid- '80s. In 1986, Publisher Doug Davis called me into his office and told me he was going to double the newspaper's subscription price and that we would not lose any subscribers.

I thought he was crazy.

Then he told me his plan. We would double the price, but we would also double the amount of news we were putting in each paper. By this time, the Democrat was publishing twice weekly.

I was excited about the prospect of having more money to work with for the news department, but that hope was quickly dashed. Doug let me know that I was only going to have a limited amount of money to work with. I would not be able to bring in any full-time experienced reporters. I would have to make to do with part-timers and stringers.

After thinking about it for a few days, I hit on the plan that successfully carried the newspaper until I left four years later. Part of it was adding high school and college students to work part-time, not just to cover school activities, but also other news after receiving sufficient training. This program paid immediate benefits from three high school students, Kari Wegener and Jason Stansberry from Lamar and Peggy Brinkhoff from Golden City. and continued over the next few years with current Jasper County Sheriff Randee Kaiser, Amy Lamb, Holly Sundy, Cherie Thomas, Mindy Atnip, and Mary Lou Newman, among others.

The young reporters were half of the equation. My other decision was to ask Judy Probert if she wanted to cover Golden City Council, the Golden City R-3 Board of Education, and school news. She was initially reluctant, but she threw herself into the task, and thanks to her work and the contributions from the young reporters, Doug Davis was proven to be correct. We had increased prices and our circulation not only remained level, but it increased slightly.

A big reason for that success was Judy's hard work and an approach that was unlike any I ever saw from a reporter. She was so nice to the people she interviewed that they did not want to disappoint her by not giving her a story. They quickly discovered that you did not mistake that inherent sweetness for lack of knowledge. If anyone ever tried to pull a fast one on Judy, she would sit there momentarily, taking it all in and then hit them with one politely-phrased question that would let them know you were not going to pull the wool over this grandmother's eyes.

It is a shame that newspaper hall of fames, when they open their doors for community journalists, invariably induct people who owned small-town newspapers and became involved in the state organizations.

If ever there was anyone who earned a place in the hall of fame, it was Judy Probert, who died last week at age 84. Certainly, there should be room for a reporter who could write a fair, but devastating story about a city council's conduct at a meeting one week and then bake cookies and bring them to the next meeting.

Bob Woodward wouldn't do that.

Judy Probert was one of a kind, a civilizing force in a profession not often known for civility.
Posted by Randy at 7:07 PM