Still time to give e-books as gifts 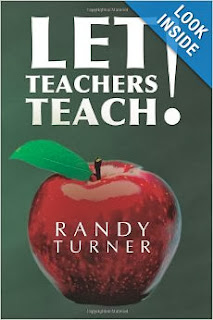 We're already at December 23, but there is still time to order one gift that will arrive on time- e-books.

Consider the following e-books, all of which can be found on my Amazon.com page: A portion of the Amazon descriptions of the books follows:

Let Teachers Teach- In Let Teachers Teach, Turner, a former newspaper reporter and editor, offers his first collection of essays detailing the problems in American education and most of those problems, he says, start with those who are needlessly trying to reform it.
Turner addresses the attacks made on teachers, the billionaire reformers, teaching to the test, and the lies that are told to make discipline statistics look better.The book also features Turner's essays on a former student's suicide, tributes to a fired principal and an inspirational teacher, and his writing on the May 22, 2011, Joplin Tornado and its effect and on his school and his teaching.The collection also includes Turner's updates on several of the essays. 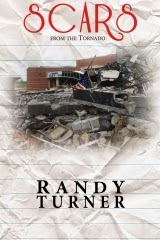 Scars from the Tornado: One Year at Joplin East Middle School- When the most deadly tornado to hit the United States in six decades roared through Joplin, Missouri, on May 22, 2011, it destroyed one-third of the city, and took 161 lives. Among those most affected by the natural disaster were the 500 students of East Middle School, most of whom lived in the path of the tornado. Many of the students lost their homes and had their lives changed forever. One student lost his life. Scars from the Tornado tells the story of how those students and the staff at East Middle School battled their tornado demons, moving their base of operations to an empty warehouse on the outskirts of the district and starting school on time, just 87 days after the tornado. In their own words, students tell their tornado stories and recount the events of their most unlikely school year. Randy Turner reveals how he and his fellow faculty members battled to make a warehouse into a school and a second home for the children. Scars from the Tornado is the heartwarming story about how teachers and students faced one of the most challenging years any school has ever had. 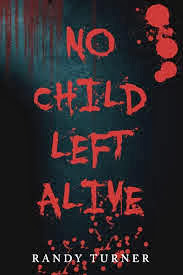 No Child Left Alive- If the shooter doesn’t get them, the system will.

The novel’s lead characters include two administrators who leave their impact in different ways.

New Superintendent Carlton Dunn focuses on improving the graduation rate through various tactics, including bribing dropout gang leader Rico Salazar to return and using him as an enforcer to keep others from dropping out.

Assistant Superintendent Abigail Saucier is pushing the faculty toward teaching to the test, but she runs into an obstacle in her quest for high test scores- the low-achieving dropouts Dunn has brought back into the system.

Abigail also has to deal with her promiscuous 15-year-old daughter Diandra, who is dating Salazar.

Caught in the middle are the teachers, Teacher of the Year Walter Tollivar, a veteran instructor who is fighting a losing battle against Abigail’s reforms, and Kayla Newman, a second-year teacher whose fear of some of her students leads her to carry a gun in the classroom.

As the teachers deal with administrative directives and an out-of-control student body, one student is planning a shooting that will make Columbine pale in comparison.

Small Town News- It's Halloween in Rockport and all hell has broken loose. The bank has been robbed and the school superintendent is missing. Are the two events connected? Small Town News examines what happens when the media circus comes to town. The book is a fictionalized version of actual events that took place in the city of Diamond, Missouri, in 2001,

The Devil's on Facebook- Cassandra Harper is a date rape victim and her father has been murdered, but things are only going to get worse for the 15-year-old because her biggest nightmare is waiting for her on her computer screen. She is about to learn that the devil is on Facebook/

5:41: Stories from the Joplin Tornado- At 5:41 p.m. May 22, 2011, the deadliest single tornado to hit the United States in 50 years tore its way through Joplin, Missouri. By the time it completed its murderous course, 160 lives were lost, and those who survived have stories they can tell for the rest of their lives.
Two veteran southwest Missouri reporters, Randy Turner and John Hacker, share some of those stories in 5:41. The book features photos taken by Hacker within moments of the deadly tornado and details about some of the horrific moments that came to symbolize May 22, 2011, in Joplin, Missouri. The book includes the following:-First person stories of the horrors of the tornado-Photographs taken moments after 5:41-The obituaries of those who died May 22 or later from injuries received in the tornado-Details from three hospitals that served the community well, including one that was hit by the tornado-The nightmarish experiences of those who had just graduated from Joplin High School moments before the tornado destroyed the building.-The outpouring of volunteering that made Joplin stand for hope in the days after May 22.-The complete text of the Joplin Tornado Memorial Service held at Missouri Southern State University, including the speeches by President Barack Obama, Gov. Jay Nixon, and Rev. Aaron Brown-The final National Weather Service report-The heroes who gave their lives to save othersThis book offers a revealing look at the day that changed Joplin, Missouri, forever. 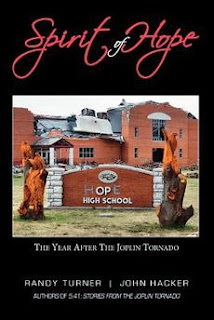 Spirit of Hope: The Year After the Joplin Tornado- The EF-5 tornado that ripped through the heart of Joplin, Missouri, May 22, 2011, killed 161 people and damaged one-third of the community. What it did not do was destroy the indomitable nature of the people who live in this city of 50,000. Spirit of Hope: The Year After the Joplin Tornado tells the story of how Joplin residents began the rebuilding process almost immediately. The heroes of this book are many- not just the leaders whose faces became familiar on local and national news, but the volunteers from Joplin and the world. Spirit of Hope, the follow-up book to 5:41: Stories from the Joplin Tornado, is the inspirational story of the city that would not die.
The book includes the following:-Original reporting from its authors, veteran newspaper reporter John Hacker and teacher and former reporter Randy Turner-First person accounts from tornado survivors and volunteers-Photos from the tornado and the major events of the following year-Complete texts of important speeches, including those given by President Barack Obama, Missouri Governor Jay Nixon, Joplin City Manager Mark Rohr, School Superintendent C. J. Huff, and radio personality Rush LimbaughCoverage of the tornado, the memorial service one week later, the Extreme Makeover build, Habitat for Humanity, the visit of the 9-11 flag, the improbable day that school started on time only 87 days after 10 schools had been destroyed or damaged, the high school prom, the graduation and the inspiring Day of Unity on the one-year anniversary-Testaments to the important role that faith, both from within and outside of Joplin helped the city's residents recover from the nation's worst tornado in six decades-Official documents, including the final National Weather Service report on the tornado and the Center for Disease Control report on a mysterious fungus that attacked some of those who went through the tornado-A forward written by one of the heroes of May 22, 2011, and the days afterward in Joplin- Fire Chief Mitch RandlesSpirit of Hope: The Year After the Joplin Tornado, is a stirring tribute to the people of Joplin and the people from across the nation and the world who offered them a hand when they needed it the most.
Posted by Randy at 11:42 PM