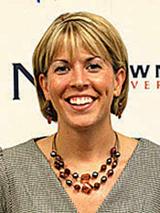 The hiring of Missouri Southern State University assistant women's basketball coach Jaime Green should have been a bigger story than it was last year.

The stories about Green's hiring in March 2012 addressed her status as a former player for Coach Mary Ann Mitts and as an MSSU alumnus, but never addressed her controversial tenure as head coach at Newman University.

That was never addressed by either the university or the area's newspaper of record, the Joplin Globe, and now there is no need to since Green will no longer be with the program and Coach Mitts has resigned.


In its March 29, 2012 edition, the Globe ran this barely rewritten version of an MSSU news release:

Jaime Green, who directed Newman University to a 42-14 record during the past two seasons, is returning to Missouri Southern as a women’s basketball assistant coach.
The rest of the article featured praise for Newman from her new boss and former coach, MaryAnn Mitts, as well as her impressive won-loss record at Labette Community College before she took the Newman University job.
The news article/press release contains no mention of the controversy that surrounded Green during her two years at Newman.
There was no mention of the recruiting violations that caused her to be suspended for one game last season and cost the basketball program two scholarships and limited its recruiting visits from unlimited to eight. (The punishments were inflicted by the university, which sent a report on the incident to the NCAA.)
And nowhere can you find the news that two of her recruits had to be booted off the Jets' squad after they were arrested for dealing cocaine.
And nowhere is it reported that Green got into trouble for a Facebook post she made which indicated the accusations against her were false.
Published reports on the recruiting violation say that Green, not wanting to leave a paper trail that would lead back to her, asked one of her players to use her credit card to pay $368 worth of parking fines incurred by two players she was trying to recruit from Division I schools. The fines had to be paid before the universities would release the players' transcripts.
Though later quotes attributed to Green after the violations had been revealed indicated that she was not completely versed in NCAA rules, quotes given by the player she asked to help her to the Wichita Eagle indicate Green knew full well she was violating rules.
"She (Green) told me to keep quiet about it. She said she'd pay me back in cash, but I shouldn't say anything because it could get her in trouble."
The two players did not turn out to be worth it for Green or Newman University. One of them left before ever playing a game, while the main target, 6-1 Kellindra Zackrey blew out her ACL during her first season and then during her second season was one of the two players kicked off the team after being arrested for dealing cocaine and marijuana.
After Green issued statement taking responsibility for the recruiting violations, she turned right around and called them "false accusations" on her Facebook page.
She left this comment, which was later removed:

No matter what the false accusations, no matter how hard they throw their stones, at the end of the day the ONLY feelings I have in my heart are grace and forgiveness. This business is a rough one. BUT the players, the fans, the recruits, and the lives that I get to touch and the lives that impact mine are always worth it in the end. This, too, shall pass. I refuse to cast the first stone. GO JETS!!!!!
Apparently, that statement did not go over well with Newman officials. From the Wichita Eagle blog:

Here’s the statement from the school, via Newman director of communications Kelly Snedden, regarding the FB post:

“Coach Green apologizes for using the words “false accusations” on her personal Facebook page. The University stands by the women’s basketball coaching staff as they, the Newman University Athletic Department, and the entire university community continue to learn the NCAA’s compliance processes.”

Green said the recruiting violations and NCAA investigation had nothing to do with her decision to leave Newman University.

"Absolutely not," Green said in an e-mail interview with the Wichita Eagle. "I am returning home to my alma mater. I have the opportunity to learn from (my) mentor and be less than an hour away from my family in Arkansas. Moving from a head coaching position in the Heartland (Conference) to an assistant coach in the MIAA is not a step backwards or a lateral move, but in my opinion, a step forward. The MIAA is the best D2 conference in the nation and the fact that my it is my alma mater and so close to my family was a no-brainer."

Green's problems at Newman were never addressed in the Joplin Globe, most likely because her hiring came after Publisher Michael Beatty struck a deal with former President Bruce Speck to concentrate on positive stories about the university.

After this hire, which sounded so good on paper, a former journalism student of mine joined me in an online chat/Google search.
And a Wichita Eagle blog showed up with what you report.
Of course, I was working in Lee's Summit, Mo., at the time and he was graduated and had moved on.
If The Chart and the Globe neither found that, they were not working hard. If they did and ignored it, that is so much worse.