2013 in Review: Domestic assault, assault on police officer not enough to get alleged kidnapper's probation revoked 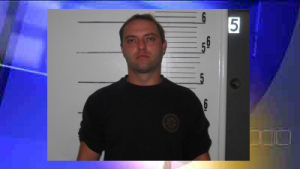 Bobby Dale Bourne, 34, Lamar, is in the Barton County Jail with a $1 million bond on a charge of kidnapping 12-year-old Adrianna Horton of Golden City, but online court records indicate he could have been locked up months ago except for a series of delays and bureaucratic malfunctions.

During a hearing Sept. 10, 2012, in Polk County Circuit Court, Bourne admitted he violated his probation on a 2006 felony tampering charge by assaulting a law enforcement officer and being intoxicated.

Though a motion to revoke Bourne's probation and send him to prison for five years was filed, no hearing was ever held. Polk County records show that during an October 1 hearing, Judge John Sims ruled that Bourne's probation would be continued with the same conditions.

Before the month was out, court records indicate, Bourne had violated his probation two more times.

Though there is no mention in the Polk County online records of what the violations were, but it would appear that at least one of the violations occurred just one week after Judge Sims' decision when Bourne was charged with two counts of domestic assault.

On Nov. 5, a warrant was issued for Bourne's arrest and his bond was set at $60,000. Three times revocation hearings were scheduled and three times they were postponed. In the middle of that time, Judge Sims retired, throwing another monkey wrench into the works.

The motion to revoke Bourne's probation was withdrawn and on Feb. 8, the $60,000 bond was posted. His probation ended March 4.

Shortly after that, the assault charges against Bourne were reduced from felony to misdemeanor; he pleaded guilty and was sentenced to 60 days in jail on each count with the sentences to run concurrently.

Missouri Department of Corrections records show Bourne is on probation for the domestic assault charges, as well as assault on a law enforcement officer and resisting arrest.

As this was written, the search continues for Adrianna Horton.
Posted by Randy at 10:14 AM