Scearce on Woolston vote: You're going to split this town 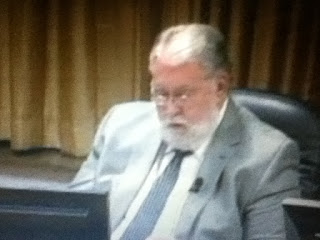 By the time the vote was over, the results were the same- Mike Woolston was no longer a Joplin City Council member.

What the decision to accept a written statement provided by Woolston's lawyer that absolved his client of all blame did was the topic of the lively discussion that concluded moments ago at tonight's council meeting.

Councilman Bill Scearce disagreed with the mayor. "You're going to split this town if you do this."

Councilman Gary Shaw took the strongest stance in favor or the resignation and statement. Shaw labeled the state audit, the Loraine Report, and the people of Joplin who had complained about Woolston as just expressing "opinions." He said he voted to have the hearing so that Woolston would have the opportunity to defend himself and that he did so "out of respect for his long service to the city."

Shaw said if any evidence of wrongdoing had surfaced in the hearing, Woolston would have been removed from the council, so his resignation served the same purpose.

Councilwoman Miranda Lewis said that in the time after the tornado, "I do not know of a single person who could go back and say, 'Man, I did everything right.' In honor of his service to the city, I feel that it was the right thing to do to let him resign with dignity."

Councilman Ryan Stanley said he would not have accepted the statement if it had included wording saying that Woolston was not guilty of conflict of interest. "There would have had to be a great defense to prove there was not a conflict of interest." Stanley said that in honor of Woolston's service, he was willing to give him a victory on the other points and that he did not "want to damage his reputation and character."

Seibert said the city had "a very strong case, but we never did get to hear Mr. Woolston's side." The mayor said he was impressed by the portion in Woolston's statement in which he said he wanted to "avoid additional turmoil."

Each of the three council members who voted not to accept Woolston's resignation and the joint statement, spoke.

Rosenberg, who brought the charges against Woolston, took issue with an earlier statement by the city attorney that he could have met with the council in a closed session to discuss the settlement. Rosenberg noted that council members are not employees so any discussions about them need to be  held in open session.

Scearce read a prepared statement and said he could not understand how "five members of this council could vote for something that is untrue. You decided the outcome of the hearing without hearing any facts or witnesses."

Colbert-Kean said she was against the joint statement and that she had no problems with accepting Woolston's resignation without it.

Before the council discussion, Edwards said the city had 20 witnesses, 50 exhibits and hundreds of pages of documentary evidence. that would have been used during Woolston's hearing.

Time for Rest of City Council members to change!

That's a great attitude to have. If you aren't willing to be part of the solution, you're part of the problem.

Um... you do realize that the Council split 5-3 on this, don't you? So what's the purpose in throwing all of them out? Either five or three took your side.

The decision of the 5 council members to accept the settlement was unfair to both Woolston and the public. Woolston will never get the opportunity to tell his side of the story and the public will forever be left feeling as if the council betrayed its trust. I think this was less about allowing Woolston to resign "with dignity" and more about protecting those who would have had to testify and possibly incriminate themselves and others. If, as suggested by several of the council members, the end result justified the means, why didn't they just vote to accept Woolston's resignation without the settlement and then allow the chips to fall where they may? Why did they rush to accept a settlement that absolved Woolston of all wrongdoing when they had not even been presented the evidence? And how will they justify their decision if later on the federal or state authorities decide to prosecute the case? I believe Mr. Scearce is correct......this decision will split the City and forever be a stain on the reputation of those who voted against allowing the due process of law to shed some light on the subject.

At least Gary Shaw has gained self knowledge. That is about all he has done except close his eyes to protect his boy Rohr and now his friend Woolston.

I really dislike the "let's move forward" attitude because it implicitly states we should no learn from the mistakes of the past. Of course, if you don't think corruption that benefits you and yours is a mistake, it's all good.

They just did it this way to save woolys realtors license

The FBI will not care about "moving on." If there is stuff in the diapers, they will know what to do with it.

Correct me if I am wrong. Wasn't it Woolston's attorneys that requested there be no hearing? That sure doesn't sound like someone anxious to tell his side of the story to me. And exactly what distinguished service has Mr. Woolston performed for all of us taxpaying citizens? What a crock! He made an idiot of himself on national tv when interviewed by Anderson Cooper ranting about how we are going to kick that tornado in the ass or something like that. He bought his way in to the last election with a single 10,000 dollar donation from the state board of realtors. Boy that is true dedication there. He abstained from voting on every tax giveaway that he or current and future business clients would benefit from. That is quite honorable. I am convinced that his arranging the purchase and sale of all that land at 20th and Connecticut was nothing but a lucky guess as to where a new 20 million dollar library might be located. Yep, Mr. Woolston must be wringing his hands with distraught that his side of the story has been hijacked by five council members. I am sure he is calling Mr. Scearce as I speak to thank him for holding out to hear his side of the story. Something in the air says that Mr. Woolston just might get his chance at his side of the story yet. It just won't be in front of his buddies on the council.

Edwards said the city had 20 witnesses, 50 exhibits and hundreds of pages of documentary evidence. that would have been used during Woolston's hearing.

That's an opinion? (This is easy.)

Don't forget that the land where the new library is going is not "owned" by the city. The city of Joplin is paying approximately $15,000 a month for 99 years to the family that owns it.