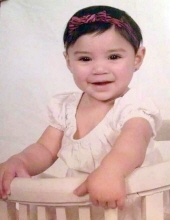 A Go Fund Me campaign has been started to help the family of two-year-old Carthage murder victim Emalata Hoeft.

The campaign began with the following message:

Hello family and friends, I'm sure we have all heard of the tragic passing of Emalata Hoeft and are filled with all types of emotion. For those of you who don't know, Baby Ema's life was tragically brought to an end at the young age of TWO at the hands of monsters who didn't deserve her. But instead of letting the anger take over our hearts and filling our souls with hate, we decided to start a fund in honor of Ema. She deserves a funeral that is as beautiful as she, so we're trying to raise whatever we can to help with funeral cost and lawyer fees the family may need to bring her the justice she deserves. We set the goal high, but we're just trying to gather whatever we can. She didn't deserve to go like she did, we'll fight the darkness with light and try to send her off in the most beautiful way that we can. So please, whatever you can give, the family will most appreciate it. Thank you and God bless you all!

A September 23 hearing is scheduled for Tearra Diane Olson, 20, Carthage, who pleaded not guilty during a video arraignment.September 3 to a felony child abuse charge. Her fiancee, Emalata's father, Albert Steven O'Connor, pleaded not guilty to a felony charge of endangering the welfare of the child. The two had only been in Carthage for a few months, coming here from Fairfield, California.

The probable cause affidavit indicates that Emalata had refused to eat, was crying, and a frustrated Olson slammed the girl's head against a hard surface three times.

Olson and O'Connor had left her alone at home, locked in her room, with a sippy cup, while he worked at Butterball and she worked at Flex-o-Lators, according to the probable cause affidavit.
Posted by Randy at 11:04 AM