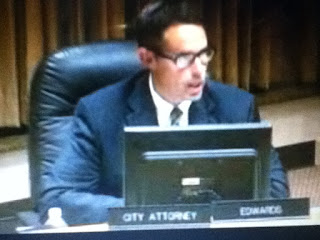 The Joplin City Council, by a 5-3 vote Monday night, accepted the resignation of Councilman Mike Woolston and approved a joint statement that absolved Woolston of wrongdoing.

The accompanying video shows the discussion that took place before that vote with four of the five council members who voted to accept the resignation and all three who voted against it offering their explanations of why they voted as they did.

The video begins with a tortured explanation from City Attorney Peter Edwards of how the original vote was taken, though he still can't bring himself to admit that he and the Council violated the Sunshine Law.

Woolston sandbags city; only side you’ll get to hear is his now. 
Elevated to angel status with Rohr and Wallace.

Jordan Aubey CBS KOAM-TV & Fox 14 KFJX-TV
11 mins ·
Former Joplin City Councilman Mike Woolston says personal budget restraints, brought on by attorney fees, made him resign from city council ahead of a city council censorship hearing. But he wants the "facts" to be known. You'll hear his side of the story this evening.