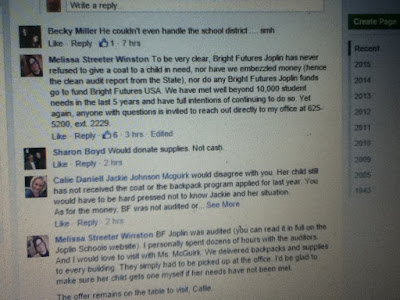 During a Joplin R-8 Board of Education meeting in which Superintendent Norm Ridder suggested that  the role of Bright Futures Joplin may be re-evaluated, the director of the local program was vigorously defending the program on social media, even though she was attending the board meeting.

For the past several hours, Melissa Winston has responded to criticisms of Bright Futures on the KZRG Facebook page.

Winston made other comments, including some during the board session, as noted earlier.

Some of that criticism comes from BFUSA's hiring of former R-8 Superintendent C. J. Huff as a paid consultant.

BFUSA treasurer Mark Quinn, who has been the spokesman for the organization recently, continued that role on the KZRG Facebook site with comments, including this one, which was posted Monday:


. I am friends with CJ but that doesn't mean that I would support him on anything if he wasn't capable of delivering great results that will ultimately HELP MORE KIDS. (When CJ comes back after 6 months and as a result of his efforts BFUSA will now be helping thousands more children, will that change your mind?) To answer your questions...CJ didn't do this when he was on the board because the demand on his time for this project is almost like taking on a full time job. I don't think we should ask anyone to do this much work for free when he has to start thinking about a new career and taking care of his family because his exit package isn't going to last forever. He deserves to be paid for his time because we live in America and that is what we do here. If you were not able to listen to the interview I explain why we pay outside consultants sometimes to help organizations grow. The best practices of the top rated charities pay marketing firms and good/fair salaries to their leadership so that they can grow. I would suggest a visit to a website like charity navigator to learn more about that. Bottom line on that is if you grow BFUSA then thousands more kids benefit and that is what this is about after all; but some of you posting here have lost sight of that. Of all the things that you can attack, why go after a charity where a group of thousands of volunteers in this community are helping kids and families that are struggling. No program is going to be perfect. No program is going to be run exactly as you would lay it out. By your words here you are hurting the very thing that is helping people that need it most. For the record there are only two schools that have left BF and only one of those site BFUSA bringing in a consultant as part of that reason for leaving, and per their own comments, they had been considering it for a long time anyway.

What I think is it is time to do, is dismiss Jennifer Doshier, Jason Cravens, Tina Smith, and both curriculum directors. I know, for a fact, after a visit, that Dr. Ridder cringes every time JD opens her mouth. He is talking to former employees, and from my visit, all former McKinley employees. I also let him know that Tina Smith took my deposition on another employee, and asked me what the main problem was, I was honest and told her it came from the head of McKinley School JD. I also personally know 7-9 other teachers that told Ms. Smith the same thing.
I also told him how Sarah Stevens handed out a survey for the teachers. It allegedly was "confidential". She went into her meeting, told her committee that she ripped them up and trashed them because they were too negative. You all better be polishing that resume, because the writing is on the wall. Your bullying, lies, and getting rid of people because they truly know what is going on, has come to an abrupt halt. Your names have come up in private and confidential meetings with Dr. Ridder.
Karma, we all know what happens with that.

Lie down with dogs- get fleas.

P.S. Get control of your capitalization, it's rather unseemly to be perceived as SHOUTING ALL THE TIME!!!!!

Just who the hell is this Quinn guy?

So will Dr. Ridder actually fire these folks and get started back on the right track or will he just "recommend" that happen and will leave that to his permanent replacement??

Quinn is about as shady as the come. I would love to know why he is involved in any fashion. I don't want to hear that he cares about the kids because I know he doesn't. His kids attend a private school. He has been entitled all his life. He is not from this area. His resume is full of lies. It's been fact checked. He is shady and is the main reason I would avoid any association with BF.

Quinn and Vann are shady and if they are in bed with Huff, they all are for sure. Quinn seems to be nothing but an angry hot head, Vann seems to be someone who wants to use charitable dollars for her own uses and Huff only cares about making a buck, no matter who's buck it is or how he makes it. The IRS should do an audit, then we would all know an audit was actually done and done thoroughly. This who thing stinks like a giant fat cats turd.

Is this Quinn's blog?

Q's Views The Law’s Of Hype And Acceleration

"Think about how many mattress companies have launched lines in Vegas to great hype that are no longer being sold at retail? What does it do to your credibility if everything you bring to market is tagged as THE NEXT BEST THING. Not everybody does that but there are a few that go that big on all product launches and at the end of the day it has to hurt them. I think it is important to be enthusiastic about the products that you develop, but if you are going to tout them as the “end all be all” then they had better deliver or your credibility will suffer. As they say, under promise and over deliver and you will make everyone happy.

Nothing like making your bed and then having to lay in it.

So Q makes the case that CJ should be compensated for his love of children. The "thousands of volunteers" on the other hand.....