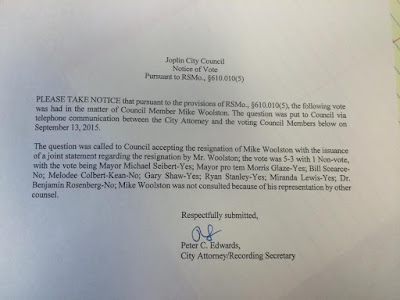 City Attorney Peter Edwards contacted all City Council members except one when determining how they voted on accepting the resignation of Mike Woolston and issuing a statement written by Woolston's lawyers.

This document, which appears to be the basis of an earlier Joplin Globe article, notes that Edwards did not call Woolston...because he was representing the council and Woolston had his own lawyers.

A check of the city of Joplin's website shows no posting of a city council meeting, or any vote for Sunday, September 13.
Posted by Randy at 4:25 PM

Very interesting that the three I expected to vote to censure Woolston are the three who voted not to accept his resignation.

Woolston is out, seat is open, Jon Buck for council. #jonbuckforcouncil

Randy I believe you might have better luck if you looked for postings announcing a jirga. In the case of a sudden resignation like this you then maybe you should search for loya jirga.

Loya jirga, TIF district, collateral agreement, master developer. Man, I have learned a lot of words since the tornado.

Hoo boy! The drama will not end. According to the City's Code of Ordinances, the Council will pick Woolston's replacement. Any bets on the early favorites?

Most likely because they wanted a hearing so all his guilt would be brought to light, rather than the "he did nothing wrong" BS that he basically got a deal for.