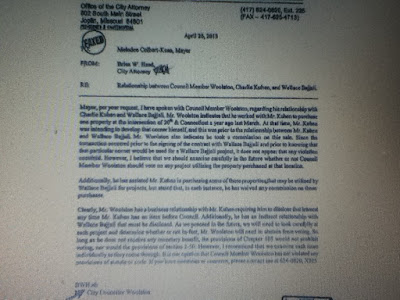 During all of the times he has proclaimed his innocence of any conflict-of-interest charges, former Joplin City Councilman Mike Woolston has waved his claim that former City Attorney Brian Head can given him a get out of jail free card.

Woolston has always left the impression that he sought Head's opinion on whether or not his dealings with businessman Charlie Kuehn of Four State Homes was legally or ethically wrong.

A letter included in the evidence current City Attorney Peter Edwards collected against Woolston for a hearing that never took place shows that it was Melodee Colbert-Kean, who was mayor at the time who asked Head to look into a possible connection between Woolston and master developer Wallace Bajjali.

When Head relayed what Woolston had told him, in a message dated April 26, 2013, he told the mayor that they needed keep tabs on any possible relationship between Woolston and the master developer.

Mayor, per your request, I have spoken with Council Member Woolston regarding his relationship with Charlie Kuehn and Wallace Bajjali. Mr Woolston indicates that he worked with Mr. Kuehn to purchase one property at the intersection of 20th and Connecticut a year ago last March. At that time, Mr. Kuehn was intending to develop that corner himself, and this was prior to the relationship between Mr. Kuehn and Wallace Bajjali. Mr. Woolston also indicates that he took a commission on this sale.

Since the transaction occurred prior to the signing of the contract with Wallace Bajjali and prior to knowing that that particular corner would be used for a Wallace Bajjali project, it does not appear that any violation occurred. However, I believe that we should examine carefully in the future whether or not Council Member Woolston should vote on any project utilizing the property purchased at that location.

Additionally, he has assisted Mr. Kuehn in purchasing some of those properties that may be utilized by Wallace Bajjali for projects, but stated that, in each instance, he has waived any commission on those purchases.

Clearly, Mr. Woolston has a business relationship with Mr. Kuehn requiring him to disclose that interest any time Mr. Kuehn has an item before Council. Additionally, he has an indirect relationship with Wallace Bajjali that must be disclosed. As we proceed in the future, we will need to look carefully at each project and determine whether or not, in fact, Mr. Woolston will need to abstain from voting. So long as he does not receive any monetary benefit, the provisions of Chapter 105 would not prohibit voting, nor would the provisions of Section 2-50. However, I recommend that we examine each issue individually as they come through. It is our opinion that Councilman Woolston has not violated any provisions of statute or code.

What Head was not taking into consideration at that point were some of the items that were brought up in the state audit. In addition to being a City Council member, Woolston served on the Citizens Advisory Recovery Team and not only pushed for the hiring of Wallace Bajjali as master developer, but did some of the checking into the firm's background.

As a member of CART, Woolston was also aware of Wallace Bajjali's plans.

Woolston also acknowledged in his interview with Thomas Loraine that, though he did not receive any commissions from any later sales of the property in the area of 20th and Connecticut that Charlie Kuehn was going to do his best to make it up to him in some other way.

Of course, it doesn't matter much since the City Council, by that 5-3 margin, absolved Woolston of any wrongdoing.
***
It may end up being the only record available of what people such as Mike Woolston, C. J. Huff, and Mark Rohr did from May 22, 2011, to the present. Silver Lining in a Funnel Cloud: Greed, Corruption, and the Joplin Tornado is available locally at Always Buying Books, Changing Hands Book Shoppe and the Book Guy in Joplin, Pat's Books in Carthage, and Cato's Connection in Joplin. It is also available in paperback and e-book formats from Amazon.com.

Its unbelievable how David Wallace is a snake! He made a million dollars last year in salary. Yet he's claiming his father paid the $5000 retainer for his bankruptcy attorney. I wonder where he's hiding assets. This is all a ploy to pull a fast one. He's been busy remodeling his home and living high on the hog. I hope someone involved with his bankruptcy uncovers the grand scheme. He's dangerous to society.