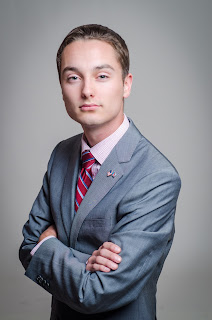 Rylee Hartwell is a young man who is guided by the principles that have made America a beacon of light in a dark world; democracy, morality, and faith. Of Democracy, Thomas Jefferson wrote, “The government closest to the people serves the people best.”

Of morality and faith, George Washington said in his farewell address, “Of all the dispositions and habits which lead to political prosperity, religion and morality are indispensable supports. In vain would that man claim the tribute of patriotism, who should labor to subvert these great pillars of human happiness, these firmest props of the duties of men and citizens.”

Keeping this guiding principles in mind, Rylee Hartwell hopes to represent his community and wholly represent the concerns of Joplin citizens by seeking an appointment to the City Council. As a native of Joplin and close observer of the community, Hartwell's vision for the city is closely aligned with patrons in the community. Also, considering recent problems plaguing the city Hartwell believes the people of Joplin are searching for a person of integrity who supports progress based on timeless community values.

* Mindfully creating long term capacity for the city, coupled with innovative economic development in both the public and private sectors


Hartwell is a student at Missouri Southern State University, and is working towards his Bachelor of Science in Secondary Education. He plans to teach social sciences after graduation and to work towards his goal of becoming a Public Schools Superintendent.


Hartwell became particularly involved in the Joplin community after the May 22, 2011 tornado with hopes to rebuild a better city for his hometown. Hartwell founded and authored his own blog about Joplin Schools, and has written freelance for the Joplin Globe, Joplin Regional Business Journal, The Carthage Press, and served as the Executive Editor-in-Chief of the Spyglass.

In 2015, he received the “All Missouri Writer” the highest distinction given by the Missouri Interscholastic Press Association for his in-depth investigative coverage of the newly rebuilt Joplin High School and Joplin Schools administration.

Additionally, in March 2015, he moderated the Joplin Schools Board of Education candidates debate on behalf of The Joplin Globe and Missouri Southern State University. In addition, he was awarded the Joplin High School Social Sciences Department Outstanding Senior.


Currently, he is the Vice-President of Circle K (a Kiwanis sponsored service organization) and is a member of the Joplin Kiwanis Apple Committee, Kappa Alpha Order/Delta Pi Chapter, Missouri Southern State University Student Senate, and Catholics on Campus.

He has been active in the Joplin Area Chamber of Commerce to promote Joplin High School, and was elected to be the class speaker for the JACC’s Tomorrow’s Leaders Today program.


In addition to his various interests, Hartwell works as an Executive Personal Assistant to the owner at Snodgrass Collision Center and Snodgrass Farms. In his spare time he enjoys fishing, volunteering, and spending time with his nieces and nephews.

To say that Rylee Hartwell is a beacon of faith and integrity would be an unfortunate far cry from the truth. I have personally witnessed his damaging lies, intentional deception, misuse of the truth out of context, his agenda pandering, and poor treatment of others. I would leave that seat vacant before I voted for him. Though there are good qualities about Rylee, I would suggest that they desperately need to mature and grow before he will be any kind of a decent public servant who is ready to sacrifice and serve at the level required to be successful.

I have known Rylee for years and know what he stands for. 6:23 does not know what he is talking about. Rylee is mature beyond his years and would be great in the City Council. We need fresh young attitudes like his rather than the old, good ole boy politics that led to Woolston's seat being vacated.

I wish I knew what "...Mindfully creating long term capacity for the city, coupled with innovative economic development in both the public and private sectors..." meant.

Who in government is he contacted to, maybe even the Joplin Globe.

I'm curious to hear the "lies" that you speak of: please give hard-driven examples & evidence-based facts before you go spewing off about someone. "Hearsay" doesn't justify your response. I, personally, have witnessed Rylee Hartwell, in personal attendance, at various local meetings & functions, with tablet & pen in hand, taking notes; I have, personally, seen him collect various forms of data, information, & paperwork, from various sources & locations (specifically, from the local Globe, Turner Report, KZRG, & local political affiliates), before speaking, candidly, honestly, & before delivering his, well-informed, thoughts & opinions. I admire & respect this young man for stepping up to the plate, faithfully, committedly, & honestly. He is not a stakeholder & simply, works to seek betterment, for all. If you have not witnessed this young man's commitment, due-diligence, & desire to do the right thing, then, you my friend, are missing out, & I believe, need to do YOUR homework before spewing off such invalid, non-supported statements. You are speaking negatively about a young man, & you have stated, ONLY, your "opinion" of him. Nothing you have stated is foundated. Therefore, I take your comment, with a grain of salt. After everything our community has been through, I seek cold, hard evidence-based, fact-driven data, information, & drawn conclusions. Because someone said so, does not make it correct, valid, or true. This type of thinking & mentality, is what has gotten our community, in these types of positions, in the first place..."might as well" spending; "we'll benefit from the TIF, later on down the road;" "I'm the mayor, (& a realtor) asking for you to sell your property to the city, but I have no idea what's going to come of it?" TRUST in this community has been broken, & it needs to be rebuilt. This comes with time, patience, consistency, transparency, integrity, AND fact-driven support & evidence...not hearsay & comments from the peanut gallery.

I like Rylie and have quite a bit of confidence in him. However, I can't stand that photo of him.

I just can't imagine an 18 year old kid bringing what is needed to the table. I don't care how mature, hard working, or trustworthy he is. He is a freshman in college. Get your degree, get some life experience, and THEN we'll talk. I've never met an 18 year old (no matter how impressive he/she was) that had the wisdom and fortitude to take on this level of responsibility and pressure. I think he will find that living in the spotlight and dealing with the backlash of local politics is much harder than it sounds when you're the one receiving the criticism. Good grief, the kid's frontal lobe isn't even completely developed yet! 10 years from now, I'm sure he'll be awesome. But for now, go back to class.

He's already got the slimy politician stuff down.

I would like to clarify that Rylee Hartwell has never been a member of the Missouri Southern Student Senate. By looking at the MSSU Student Senate page you'll discover that Rylee isn't pictured or mentioned in any of this years Student Senates photos.

This leads me to perceive Rylee Hartwell as a power driven and untrustworthy individual. I'm also assuming that this teenager whose likely aspiring to be a school administrator or a politician did this either as a publicity stunt or as a way to help his ego.